I am sure you have heard the term fiscal cliff in the news the past few weeks.  This term refers to the alleged crisis that may occur at the end of the year when the Bush-era tax cuts are set to expire, and when additional cuts are made to many federal programs.  Democrats and Republicans are currently in negotiations to avoid going over the fiscal cliff.  Just as parents are excited when a child is born, animal lovers are thrilled when a new tiger is born in a zoo, astronomers go nuts when they discover a new star, linguists may be excited when a new metaphor is born.  Please pass the cigars…. 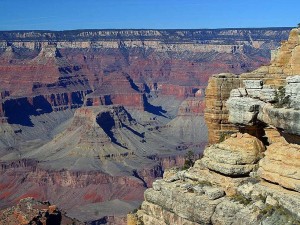 This term fiscal cliff is a great example of a political metaphor for many reasons.

1)   It is an example of a nature metaphor.  We have many metaphors that are derived from our experiences with our natural world such as a flood of problems, a wave of immigration, a rift between the parties, etc.  Anyone who has been to the Grand Canyon or who has stood at the edge of any cliff knows that is a dangerous position to be in.  A misstep or a loss of footing could result in the person falling over the edge to certain injury or death.  Thus the metaphor fiscal cliff has a connotation of a dangerous situation.

2)   While most metaphors are politically neutral, there seems to be some disagreement between Republicans and Democrats whether this is really a cliff, or a dangerous situation at all.  One wonders if Republicans are deliberately using this metaphor to make the situation sound more dangerous than it really is to force to Democrats to agree to their terms in the negotiations.

3)   Although the term fiscal cliff has been around for many years, it has never held such a prominent position in the national media and is considered to be a new use of figurative language.  The proof of this is in both written and spoken forms of the term.  In writing, most newspapers and Internet reports print it in quotation marks, i.e., the “fiscal cliff.”  The use of quotations indicates that the phrase is new and not yet commonly accepted as standard usage. In spoken reports, you may hear broadcasters refer to it as “the so-called fiscal cliff” or “what some are calling the fiscal cliff.”  Once again, these qualifying statements indicate that the term is not yet in standard usage.  However, just in the past few weeks these qualifying terms and the quotation marks have been disappearing in the media.  I would bet that by the end of the year, they will be completely gone.

4)   Popular metaphors sometimes give birth to additional terms related to the original metaphor. Thus, you may hear a person who is willing to let the tax cuts expire as a cliff jumper.  Moreover, you may hear the situation described as a cliffhanger, a term originally used to describe serial movies in the 1930s such as the Perils of Pauline in which the main character was literally left hanging off the edge of a cliff at the end of one episode.  Viewers had to “tune in next time” to find out what happened.

Let me know if you see more examples of the use of the fiscal cliff.  Comments and questions are welcome!