Whac-a-mole is a game that originated in the 1970s and requires a player to hit moles with a mallet as they pop up out of holes in an electronic board. The action of this game has been the origin of an odd political metaphor used recently to describe the inability of the armed forces to stop Taliban attacks in different regions of Afghanistan. Some political commentators refer to this process as a Whac-a-mole game.  The phrase, also spelled whack-a-mole, has also been used for years to describe military strategies in the Vietnam War and the War in Iraq.

Here are a few other metaphors derived from strategies of popular children’s games. 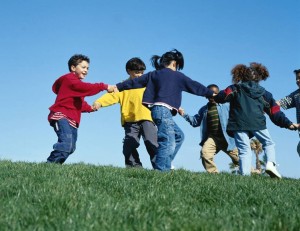 There are many games designed for children.  Although they are exciting for children to play, they are more simple than games for adults.  To say that something is child’s play means that the problem is easily solved.

Example:  Solving the economic crisis that began in 2008 was definitely not child’s play.  Many top economists and political strategists tried their best to help the president get the economy going again.

kick the can down the road

One popular children’s game is called kick the can.  One child must stand in a central area such as a large yard or more commonly a neighborhood street with his foot on a tin can that serves as a home base.  The other children run and hide behind trees and buildings.  The child with the can must try to find where the other children are hiding, but to do this, he or she must leave the can unprotected while looking around.  If the other children can get to the can before the first child returns to home base, they must kick the can so that the child cannot get it.  This is called kicking the can down the road. In metaphorical terms, kicking the can down the road means ending the game or temporarily giving up on a certain situation.

Example:  In the summer of 2010, President Obama claimed when it came to immigration reform, he did not want to kick the can down the road.  He wanted to get the House and the Senate to pass legislation to solve the immigration problems.

knock your block off

In the 1960s, there was a popular children’s game called Rock’em Sock’em Robots.  It was a toy boxing ring in which the players could pull levers and cause the plastic robots to box each other.  The head of each boxer was not permanently attached to the body.  With the correct type of punch, one player could knock off the head of the opposing robot.  This was called knocking the block off.  In common terms, completely defeating an opponent came to be called knocking someone’s block off.

Example:  In the 1980 presidential election, Ronald Reagan beat Jimmy Carter by almost 10 percentage points.  It was such as decisive victory, Reagan practically knocked Carter’s block off.

Example:  After the Japanese attack on Pearl Harbor in 1941, destroying much of the American naval fleet, the U.S. government had to put the Navy back together to win World War II.

Some children’s books contain pages in which characters pop up out from the folds of the book.  There are also some mechanical or electronic games where characters or animals pop up out of the base of the toy.  In common terms, problems or issues may pop up out of a situation where one is not expecting it.

Example:  In 2009 and 2010, many new so-called Tea Party political groups popped up all over the country in response to President Obama’s government programs which were seen by conservatives as being too progressive.

Example:  No one is exactly sure what caused the economic crisis that started in 2008.  It may be years before the experts can connect all the dots and figure out what happened.

Next time:  An analysis of this week’s State of the Union address.