President Obama ended his State of the Union Address a few weeks ago with a nice example of a series of metaphors from literature.

“… well into our third century as a nation, it remains the task of us all, as citizens of these United States, to be the authors of the next great chapter in our American story.” 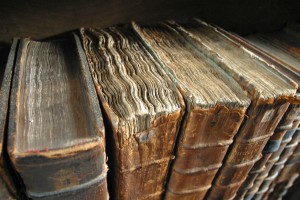 We often speak of the events in a family, business or country as a story.  These stories have authors, plots, chapters, and narrators.

Here are a few more examples.

A story is an account of important events.  A story can be fiction or nonfiction but is commonly used to describe a description of fictional events.  The word story can also be used in politics to describe what has happened in current events as if one is telling a story.

Example:  The story of the economic crisis of 2008 will be told for generations to come.

A plot is the main story in a piece of literature.  It can also mean a plan for doing something, usually something harmful, such as an assassination plot.  In politics, both meanings can be found to describe the events surrounding a politician.

Example:  During the 2010 midterm elections, some conservative groups accused President Obama of plotting to turn the United States into a socialist state.

Example:  Trying to find weapons of mass destruction was an important subplot of the first months of the War in Iraq.

A story line (sometimes written as storyline or story-line) is the main plot of a piece of literature.  In common terms, a story line is one which describes what has been happening in the development of certain events.

Example:  The story line of the War in Iraq was a long and complicated one involving a dictator, weapons of mass destruction, and a lack of quality media coverage.

A narrative is the name of story as described by the author or narrator in a piece of literature.  In common terms, the term narrative is used similarly to a story of plot to describe what has happened to an individual or group.

Example:  The narrative of Barack Obama’s rise to the presidency is a long story of growing up in poverty, getting scholarships to prestigious universities, and becoming the first African-American president of the United States.

Books are normally organized into chapters.  The chapter one is just beginning to read may be called the new chapter.  In common terms, the next part of a life or group’s existence may be described as a new chapter.

Example:  When John McCain returned from Vietnam as a war hero in 1973 and then retired from the Navy in 1981, he began a new chapter in his life that led to a long career as a U.S. Senator.

As with the metaphor of a new chapter, the final phase of a life may be called the last or final chapter.

Example:  The final chapter of combat operations in Iraq closed in 2010.

Next time:  Drones and other insect metaphors