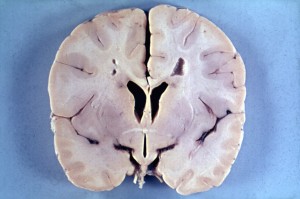 Last week at CPAC (Conservative Political Action Conference) in Washington D.C., many of the top conservative politicians such as Marco Rubio, Sarah Palin, Rand Paul and Paul Ryan discussed why the Republicans lost the 2012 election. They publicly referred to this event as an autopsy.  This was a startling use of a metaphorical expression given that an autopsy is only done when a person had died.  The implication is that the Republican Party was already dead.  Nonetheless, the conference allegedly generated new ideas for reviving the party in hopes of winning future congressional and presidential elections.

Here are a few more metaphorical expressions based on human experiences with death and dying.

When someone has a serious injury to his her arms or legs, the muscles will begin to lose their strength due to lack of use.  This process is called atrophying of the muscles.  More generally, the person’s body is sometimes thought to be wasting away before death. In politics, a process or program that is no longer successful may be described as beginning to atrophy.

Example:  Peace talks between warring nations may atrophy if the ambassadors or secretaries of state cannot make any progress.

When a person is dying, he or she may gasp for breath.  The last breath one takes before dying is called a last gasp.  Metaphorically, when a process is not working, we may say that it needs a last-gasp strategy to come back to life.

Example:  A presidential candidate behind in the polls may have a last-gasp strategy of giving more speeches just before the election.

When someone dies, we may say that he or she has succumbed or been defeated by a serious illness or injury.  In politics, a candidate or politician who loses an election or loses a battle with other members of Congress may be described as succumbing to the problems.

Example: A good president will not succumb to the pressures of his or her adversaries in the government.  Instead he or she will follow a new path.

In an emergency room, a person with a serious injury or illness will be connected to a machine that monitors the heart function of the person.  If the heart is beating normally, the machine will beep at every heartbeat and draw a line up and down on the screen.  If the heart stops beating, the line will go flat.  This is referred to as flatlining, meaning the patient has died.  In common terms, a program or process that has ceased to function may be described as flatlining.

Example: In tough economic times, a governor may need to flatline the funding for some development projects.

The word fatal means causing death. For example, a fatal accident means the injuries incurred in an accident killed the person.  In common terms, any action that causes the death of a process may be called fatal as well.  A mistake in planning an important action may be referred to as a fatal error.

Example: An unpopular bill in Congress may be dealt a fatal blow if it is opposed by a majority of one political party.

Next time:  More on Metaphors of Illness