The word redline is a metaphor with two different origins.  In some cases, a person can be redlined, meaning to be denied what is deserved or eliminated from consideration for an opportunity.  In the military during World War II, soldiers guilty of some crime would be denied their pay.  Their names would be crossed out with a red pencil which would indicate their loss of pay.  In the 1970s, some prospective homeowners would be denied a home loan because they lived in areas of certain ethnicities marked in red lines on a map.  They were also described as being redlined. 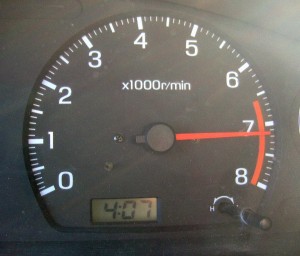 The recent conflict in Syria has led to the usage of the word redline with a different origin.  President Obama and others have said that the use of biological weapons has crossed the redline, meaning the line that causes the United States to consider military action against the Syrian government if it can be proved that they indeed used those weapons.  This use of the metaphor redline in this case is based on the use of a red area on a gauge on water boilers or engines that would indicate when the machine had reached its maximum pressure or power.   The needle passing the red line informs the operator that the machine must be shut down at that point to avoid destroying it.

We have many metaphors based on the running of machines.  Here are a few based solely on our experience with machines having problems or breaking down.

One such expression is fits and starts used to describe when a machine starts running but then stops suddenly and then starts again suddenly.  In common terms, something that runs with fits and starts does not run smoothly and has many setbacks to progress.

Example:  Although Barack Obama’s health care reform bill had many fits and starts, it was finally passed in late 2010.

Another indicator of a machine not working well is when it loses power or suddenly stalls.  Metaphorically, something that does not work at first may be described as a stalled attempt to accomplish the task.

Example: There have been many stalled attempts at peace talks between Israel and Palestine for the past several decades.

Friction is the physical force that results when two surfaces rub against each other and prevents smooth motion.  Most machines must be lubricated with oil or water to prevent them from overheating due to the friction.  In common terms, friction can indicate problems or arguments between people in a large group.

Example: Large political parties strive to have consistent policies and programs in every state to reduce the friction between members of their own parties.

A backlash occurs in a machine when the gears or mechanism stop working suddenly and force the machine backwards in its motion.  Metaphorically, a backlash occurs when one event causes a sudden negative reaction towards the creators of the first event.

Example: The growth of the fiscally conservative Tea Party in 2009 was caused in part by a backlash to Barack Obama’s large spending stimulus packages for Wall Street banks and large auto makers,

A backfire is caused when an engine does not function properly and the gas/fuel mixture explodes before the correct time.  This causes a loud explosion and a burst of fire or smoke from the exhaust system moving backwards from the engine to the rear of the vehicle.  In common terms, when an attempt to complete a task not only does not succeed but has a negative effect on the people involved, this is called backfiring. 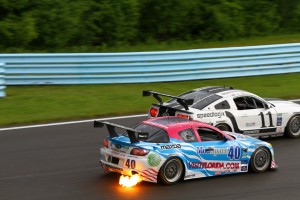 Example: Some presidential candidates are very aggressive and use harsh language against their opponents to gain favor with voters.  However, this strategy will often backfire if the voters think the candidate is being too critical and they may vote for the other candidate instead.

When an engine does not have enough lubrication for its pistons and gears, it may stop working or seize up due to the friction between the parts.  Processes in economics and politics may also seize up if they suddenly stop functioning properly.

Example: Some economists say that the economy may seize up if people and companies stop the flow of credit in the United States.

When a machine completely stops working, we may say that it has had a breakdown.  Metaphorically, any process that stops functioning completely may also be described as a breakdown.  In a related sense, a broken engine must be taken apart to see what is wrong.  This is also called breaking down the engine into its parts.

Example: One reason for the tremendous violence in Iraq during the war there was the complete breakdown of local security forces.

Example: After a presidential election, TV news commentators will provide a breakdown on how the winner was elected in every state in the nation.

in need of repair

When a machine is beginning to show signs of breaking down, we may say that it needs to be fixed or in need of repair.  Any policy or program in politics that is not be working properly may be described as being in need of repair.

Example: Most Americans do not seem to like the tax system; they feel that is in definite need of repair to make it more fair to the middle class.

Example: Some fiscal conservatives would like to see a major overhaul of the so-called entitlement programs such as Medicare and social security to save government money and reduce the deficit.

Next time:  In the Crosshairs – Hunting Metaphors