In our daily experience of sizes and shapes of objects, we can easily distinguish between whole objects and those that are broken into parts.   Normally, we conceive whole objects as being good and complete, while broken objects have less value or no value at all.  Thus, we have a negative connotation of breaking the rules. However, in other cases, whole objects or continuous lines represent the status quo, traditions, or old habits.  In these cases, something that is breaking has a positive connotation since one is creating something new or exciting. As an example of these latter cases, we may hear a news broadcaster talk about breaking news, meaning the most exciting and new story in the news at that time. Here are a few more examples of metaphors based on fragile objects.

If something is fragile, it is likely to break into pieces if dropped or struck with a strong physical force.  Metaphorically, a process or group can break into pieces under stress from outside force.  We also say that we break promises, break rules or break the silence.

Example: Political candidates must be careful not to break promises they made during a campaign.  Voters may remember and not vote for them in the next election. 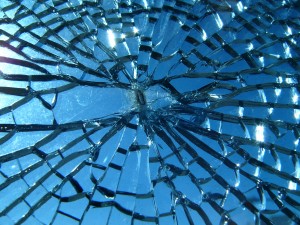 The economy is considered to be a fragile object that can be broken with a recession, depression or other widespread financial problems throughout the country.

Example: Lawmakers are always worried that high federal deficits may break the economy.

When there is a vote for any Congress or Senate bill, an equal amount of votes on both sides is considered a tie vote.  However a tie is also considered a fragile state and can be broken.

Example: In the case of a tied vote in the U.S. Senate, the Vice-President must break the tie.

When someone changes a policy or program, the new rules may be confusing.  However, this situation can also be broken cleanly if there are no longer any connections between the old policies and the new ones.

Example: Usually a new president will make a clean break with the previous administration and start his or her own policies and programs.

break from the past

As with a clean break, a politician may also make a break from past experiences or views.

Example: A politician with legal troubles may want to make a break from the past before he or she tries to run for office again.

When something completely goes wrong, we say that there is a breakdown.

Example: Some critics say that the terrorist attacks on 9/11 were the result of a complete communication breakdown among intelligence agencies in Washington D. C.

In a complex metaphor, we speak of breaking or shattering records.  On one level, a level of achievement in a certain area, such as a speed record in sports, is thought to be a fragile object.  This may be due to the fact that vinyl music records are known to shatter easily. On a second level, breaking these fragile records indicates that a new advancement has been made in a certain area.

Example: During an election, a popular candidate may break records for voter turnout.

With some physical objects it is possible to break off a part from the whole.  This is true of branches from a tree or part of a hard piece of candy or larger piece of food. Metaphorically, to break off something means to stop doing something before it is complete.

Example: Many American presidents have had to break off negotiations for peace with either Israel or Palestine due to a lack of progress.

When a tax is reduced or eliminated for a certain income group or business, we say that they have been given a tax break.

Example: Everyone likes to pay fewer taxes, but many Americans feel that millionaires should not be given tax breaks.

When an action continues for a long time, any stoppage of that action is considered a break, as if the action is broken into two parts.

Example: During the wars in Iraq and Afghanistan, family members of American soldiers hoped for a break in the violence and the soldiers could come home.

Next time:  The Top Story! – Metaphors of Top and Bottom

One thought on “Breaking News! – Metaphors of Fragile Objects”