The United States is well known for helping other countries in need by giving donations of money, food or medical supplies.  In some cases, the U.S. also works directly with other governments by giving them military equipment or political advice.  This is sometimes referred to as propping up governments as if they are old buildings about to fall down.  For example, the United States used to be a close ally of Egyptian leader Hosni Mubarak.  However, with the deposition of Mubarak two years ago and Mohammed Morsi last week, television commentators are wondering about the wisdom of propping up governments in other countries.  Here are a few more examples of metaphors based on the ideas of governments or economies considered to be shaky buildings. 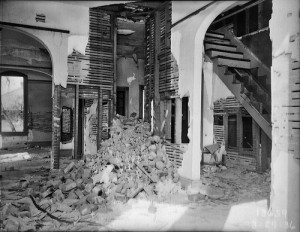 If a building is very old, or has been in an earthquake, the foundation may be unstable, and it may collapse.  In politics, governments or situations can also be called unstable.

Example: During the 1990s, the peace in the Middle East was very unstable.

When something is shaky, it is similar to being unstable.  People, organizations and governments can be called shaky as well.

Example: The housing market was shaky in 2008 before the prices crashed.

Rickety is yet another word that means unstable or shaky.

Example: Many autocratic governments in Africa rest on rickety foundations if they do not have the support of the people.

When a building is in danger of collapsing, people can use boards or metal beams to hold or prop up the walls.  In politics, when organizations or systems start to collapse, they can be propped up with new funding or policies.

Example: During World War II, the American economy was propped up with millions of dollars spent on building weapons for the war.

To shore up something also means to support it or prop it up so it does not collapse.

Example: President Obama’s stimulus packages in 2009 were designed to shore up the economy during the recession.

A buttress is a very strong wooden or metal structure on the inside or outside of building supporting the walls and roof.  In political terms, one can buttress a policy or argument with more information, money or programs.

Example: During a debate, candidates can buttress their arguments with examples from American history. 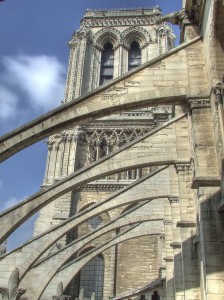 A brace is a smaller form of buttress or wooden support.  In popular terms, one can brace for a financial or natural disaster.

Example: In 2005, the residents of New Orleans were braced for Hurricane Katrina, but no one predicted there would be so much flooding

Next time:  Metaphors of War in Political Ads