To continue my analysis of metaphors of war in politics, I offer a few more examples here today.  When I was doing research for my book, I was continually amazed about how we cannot even talk about politics without using war metaphors.  Although modern cultures pride themselves on their “civilization,” they have also engaged in wars for hundreds of years.  Here are a few examples of how the language used in describing preparations for war is used in describing political campaigns. 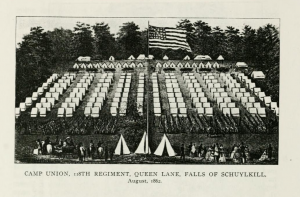 Military forces often set up an encampment or camp to prepare for battle.  In politics, a group of campaign workers or strategists may be called a camp.

Historically, when an army took control of a city or town, the local people often had to pay a tax or tribute to the new government.  Later the phrase came to mean paying a compliment to a person or group for what they have achieved.

Example:  When Barack Obama was elected the first African-American president of the United States, he paid tribute to civil rights leaders such as Martin Luther King, Jr. for opening doors for him.

A bulwark is a wall made of thick wood as part of a fortification of a city.  In modern times, the word bulwark is used metaphorically to mean something that provides defense against a verbal or ideological attack.

Example:  Some conservative politicians use their Christian faith as a bulwark against laws that condone abortions.

Historically, the money needed to finance a war on the battlefield was kept in a large chest that traveled with the commanding officers.  Metaphorically, the phrase war chest now indicates the amount of money that a candidate has to finance his or her election campaign.

Example:  Although John McCain had a large war chest when he ran for president in 2008, he did not win the election.

An arsenal is the total quantity of weapons a military possesses.  In politics, candidates can have an arsenal of complaints or attacks against their opponents.

Example:  In the 2012 Republican primary, critics of New Gingrich launched an arsenal of attacks against his past record as former Speaker of the House.

When a soldier carries a weapon, we can say that he or she is armed.  Metaphorically, a person can also be armed with ideas to be used in an argument.

Example:  In a presidential debate, candidates must be armed with many ideas they can use to explain their policies and answer the moderators’ questions. 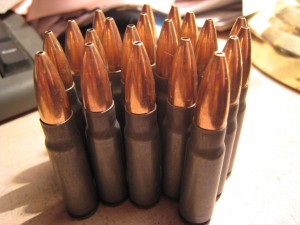 Ammunition is the quantity of bullets used in a gun.  Ammunition can also metaphorically indicate ideas or facts to fight against someone in an argument.

Example:  A candidate in an election must not make a factual mistake in a speech.  This mistake can be used as ammunition against him or her by opponents in future debates.

ranks of the unemployed

Military personnel are normally grouped into ranks such as private, corporal, captain, etc.  The groups of such personnel are called ranks.  In common terms, we may also refer to any group of people who are distinguished by a specific social class as being in ranks.

Example:  Any American who loses his or her job automatically joins the ranks of the unemployed.

an army of volunteers

A group of soldiers is called an army.  However, metaphorically, any large group of people engaged in a specific project may be called an army such as in an army of volunteers.

Example:  No presidential candidate can win an election without an army of volunteers in every state helping get that person elected.

Example:  In the 2012 election, Mitt Romney had many foot soldiers on the ground helping him campaign to defeat Barack Obama. 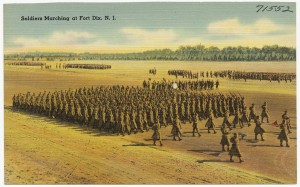 Example:  A successful presidential candidate must have several good lieutenants among the campaign staff.

Example:  President Barack Obama had to command legions of economic advisors who tried to get the country out of the recession started in 2008.

A marshal was originally a person in charge of horses.  Later the term came to mean someone in charge of troops.  Thus, someone who is in command of many soldiers was said to marshal the troops.  Metaphorically, a leader who directs a large group of people may also be referred to someone marshaling the troops.

Example:  During the Cuban Missile Crisis in 1962, President John F. Kennedy had to marshal the troops and find the best advisors to help him avoid a nuclear war with the Soviet Union.

As mentioned, a camp is a group of soldiers preparing for war.  Someone who assists the military commander to organize the troops can be referred to by the French term aide-de-camp.  In politics, an aide-de-camp is any person who helps a candidate or politician achieve his or her goals.

Example:  Nancy Reagan provided such positive support to her husband, President Ronald Reagan, one might call her an excellent aide-de-camp.

Example:  President Obama immediately assembled a task force to try to end the recession when he was elected in 2008.