We often hear that politicians are mired in gridlock in Washington.  We probably don’t give this phrase another thought, but it is actually a strange metaphor, comparing the lack of progress in negotiations to the slowness of moving through mud or swampland.  As I have noted many times in this blog, it is common for English speakers to create metaphors based on personal experience.  Although we may not have all had the frustration of walking through a swamp, we can easily understand the difficulty of walking through mud after a hard rain.  Here a few political metaphors based on swamps. 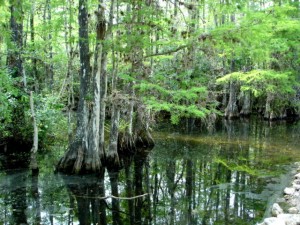 Many areas of the earth are covered in a mixture of water and soil in areas known as swamps, bogs, marshes or wetlands.  Some of these terms are used metaphorically to indicate the difficulty in getting out of complicated situations.  In one case, we say we are swamped with work if we cannot keep up with all the tasks that we are required to do at a certain time.

Example:  In July 2011, President Obama asked Americans to call their members of Congress if they wanted to make a suggestion on how to reduce the national deficit.  As a result, the phones of many Senators and Congresspersons were swamped with calls for several days.

A bog is a type of marsh, a large area covered in water that is difficult to cross.  In a similar sense, a person who cannot make good progress in a situation may be described as being bogged down.

Example:  Much to the dismay of American voters, progress in Congress is often bogged down by disagreements between Democrats and Republicans.

A mire is another word for bog or swamp.  Metaphorically, a person who is mired in something cannot make progress in a certain situation.

Example:  American politics is commonly mired in ideological differences between liberals and conservatives.

A quagmire is another old world meaning a bog or marsh.  In common terms, a quagmire is any difficult situation that is almost impossible to get out of.

Example:  After the difficulties during the War in Vietnam, many Americans felt in 2003 that the War in Iraq would be another quagmire that would cost millions of dollars and many lives.

Quicksand is an especially dangerous mixture of water and sand that traps a person.  The more one moves to get out, the more trapped one becomes.  People die every year from being trapped in quicksand.  Metaphorically, quicksand refers to any situation that looks safe but is actually a trap or a dangerous situation that one cannot escape from easily.

Example:  During the revolutions in the Middle East and North Africa that sprang up in 2011, most Americans were against any military involvement in those areas claiming it would be quicksand for our troops.

Next time:  Metaphors from Martin Luther King’s “I Have a Dream” Speech