As mentioned in my analysis of Martin Luther King, Jr.’s “I Have a Dream” speech, metaphors based on sounds can be powerful rhetorical devices.  We use metaphors of sound in everyday speech as well.  Here are a few metaphors based on our collective experiences with sounds and music.

One of the most common metaphors is saying that something sounds like something else, when we really mean that the situation indicates a certain result is predicted.  For example, if the weather forecast is for temperatures above 100 degrees, we might say, “It sounds like a hot one today.”  In politics, we might say that a certain election outcome is inevitable based on current information.

Example:  When Hillary Clinton announced her candidacy for president in 2007, there was so much excitement from women democratic voters, it sounded like she was a sure thing to win the election.  However, Barack Obama beat her in the primary, and her bid for the presidency was denied.

When a person speaks in a harsh manner, being strict or forceful, we may say that they are striking a tough note.

Example:  When John McCain talks about national security, he often strikes a tough note.  As a former prisoner of war, he knows that we need to have a strong military force.

When we speak, we always have a tone of voice, perhaps angry or calming or whatever emotion we are experiencing at the time.  A speaker is said to intone a certain message depending on his or her emotional state.

Example:  After the 9/11 terrorist attacks, President George Bush gave a speech from ground zero in which he intoned a determination to punish whoever caused the attacks.

The word tune has several meanings in English.  It can mean the melody of a song, the song itself, or as an action, it can mean finding a radio station.  In the latter case, one can tune in to a station or tune out from it.  In metaphorical terms, to tune out something means to ignore it or stop caring about it.

Example:  When there are many scandals in an election, many voters tune out and stop participating in their local or national elections.

When people cannot recognize the difference between musical tones, we say that they are tone-deaf.  In common terms, we may say that people are tone-deaf if they cannot understand different points of view.

Example:  A political candidate who is tone-deaf to the problems of the middle class in America will not win many elections.

When two sounds vibrate at similar frequencies, they are said to resonate, as when two notes within a chord will resonate together.  In common terms, when an action or event occurs and seems to affect many different groups of people, we may say that it resonates with many different people.

Example:  After many Americans lost their jobs, their homes or their pensions largely because of the greed of Wall Street investors, the talk of politicians to pass new regulations for Wall Street really resonated with the average citizen.

Under certain conditions such as a large enclosed space or chamber, a sound will bounce off of a wall and repeat itself several times until it fades away.  This is called an echo.  Metaphorically, an echo occurs when a word, idea or argument is repeated by several people after its first use. In politics, a media source that repeats the ideas or arguments of politicians may be called an echo chamber.

Another way of describing an echo in speech or music is to say that a sound reverberates.  In politics, an important idea or argument may reverberate throughout many areas of the country.

Example:  In 2010, critics of the plan to build a mosque near the sight of the terrorist attacks in New York City created arguments against Muslims that reverberated with many Americans fearful of another attack.

turn up/turn down the volume

When we play music, we can adjust the volume to be very quiet or extremely loud.  If we cannot hear the music, we may need to turn it up.  If we are playing the music too loudly, someone else may ask us to turn it down. In politics, if someone is not working hard enough to solve a particular problem, critics may say that he or she needs to turn up the volume.  If someone is being too aggressive on an issue, critics may ask him or her to turn down the volume.

Example:  After the economic crises of 2008 and 2009, many Americans wanted President Obama to turn up the volume on prosecuting Wall Street corporate CEO’s who ruined the economy. 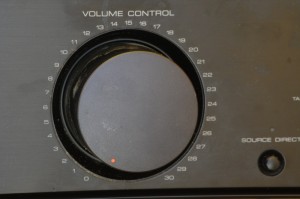 tone down the rhetoric

Rhetoric is the way that we persuade or argue a point in an argument.  Similar to the idea of turning down the volume, we can also say to tone down the rhetoric.  In politics if someone is being too aggressive on a particular issue, he or she may be asked to tone down the rhetoric, especially if that person is talking a lot but doing very little to solve the problem.

Example:  Immigration reform is a hot topic in American politics.  Critics of both Republican and Democratic politicians claim that members of Congress need to tone down the rhetoric and come up with some real-world solutions.

Next time:  More metaphors from the Syria discussions