As some of you may know, this past weekend I gave a presentation on my research to the WAESOL conference (Washington Association for the Education of Speakers of Other Languages) in Seattle.   Actually it was held at the scenic Highline Community College in the south Seattle suburb of Des Moines.   I am happy to report that it was a successful trip!  I modified the paper I gave in New York last April at the International Linguistics Association conference.  This time I spoke more about the value of teaching these metaphors to ESL students. 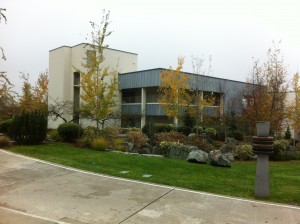 It was a grey, foggy day but a great one-day conference – very well organized with friendly people, good food and great conversations.  As for my talk, I had about 15 audience members and they all seemed to enjoy my presentation very much.   Some said that they did not realize there were so many political metaphors and were impressed with all the research I had done collecting and categorizing them.  Several teachers asked if they could get a copy of my PowerPoint presentation.  I was very pleased with the response from the audience members.

I wish I had had more participants in my session. However, I think I had a couple things working against me.  Unfortunately, I was one of the first sessions after lunch, and I was speaking in a building furthest away from the conference center.  Many people were confused about the locations of the buildings throughout the day.  It seemed that many people could not find the room so soon after lunch.

Also, in retrospect, I should have planned the presentation better.  I had the choice of doing a 25-minute or 50-minute presentation.  I had done a 20-minute talk in New York so I decided to repeat that style of presentation.  In New York I had plenty of time for questions and answers after the presentation.  However, at WAESOL, many sessions were held in small rooms that quickly filled to capacity so some people had to run to get to another building to get a seat for a next presentation they wanted to see.  Therefore, I did not have much time to talk to the audience and get valuable feedback.  I also failed to note a suggestion for the presenters to bring my own evaluation form which would have solved part of that problem.

Lastly, I made the mistake of having a salty turkey sandwich with potato chips for lunch.   Although I drank a great deal of water in the morning to make sure I was hydrated, halfway through my talk my mouth turned into the Sahara desert.  My tongue was searching desperately for an oasis in the desert or for a bucket of water to be heaved from a cool well.  LOL. I had a water bottle with me but I was reluctant to stop to take a drink since that would have interrupted the flow of my speech and/or allowed people to ask questions and delay my talk.  Since we had no session moderators, I was afraid of committing the worst presenter faux pas – interfering with the speaker after me starting on time.  This teacher  – I found out later – had come all the way from Utah, so I was glad that I did not take any time away from his presentation.  Oh well.  Live and learn.

I am grateful to the conference organizers to allow me to present my research.  It was a great experience.  On a personal note, I am also grateful for the support from my lovely wife, family and friends.  I also had a chance to see two of my oldest friends after the conference – two women whom I worked with in Peace Corps 30 years ago in Benin, West Africa.  It was great to see them again.

If anyone is interested, here is a summary of some of the great presentations I was able to see.  There were many excellent research projects presented and interesting stories told.  Check out the kids’ fascinating math mistakes and the story about the Filipina nun practicing her English pronunciation… 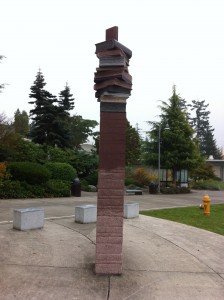 Nagla Alqaedi from Gonzaga shared her Master’s Degree research on how native speakers of Arabic have trouble learning how to write compositions in English.  Arabic composition style has grown out of extensive oral traditions and allusions to the Quran.  Thus, ESL students learning to write in English tend to tell stories with many repetitions and allusions to religious morals, as opposed to direct, linear, compact writing styles of Americans.  She said she was developing new strategies to teach the American writing styles to her students.

Ani Derderian-Aghajanian from WSU (Washington State University in Pullman, WA) shared her doctoral research on how children learn math in English.   She studied 5th graders in Jordan who were diagnosed with mathematical learning disabilities.  She showed us the following examples from their schoolwork:

Can you see what they are doing wrong?  At first, we were all stumped.  We thought maybe the students were dyslexic but then she reminded us that in Arabic, people write from right to left.  So the students were trying to break down the place value of each number from right to left.  Then they also mixed up the order of the place value, e.g., we would say that 30 + 6 = 36 or 10 + 7 = 17.  They had it all backwards.  Poor kids!  In her research, she showed how using pictures and diagrams could teach them how to write the numbers correctly.

Cody Lyon from Weber State University in Utah shared his techniques of using email for journaling.  He said he uses a famous quote from Ernest Hemingway at the start of every writing class:  “There is nothing to writing.  All you do is sit down at a typewriter and bleed.”  Most students believe that writing is a long and painful process.  He started asking his students simple questions via email, and they write back to him.  He does not correct any grammar or punctuation – he does that with other classroom exercises – so the students are free to write whatever they want.  He said the students love it and it helps to improve their writing.

Kathy Hunt from Bellevue College showed us her own research on bilingual education.  She discussed how parents who speak their native languages at home (known as heritage languages) struggle with the decisions of what language their children speak at home or at school.  She said that many children do not want to make the effort to learn their parents’ language – they just want to learn English.  Most parents have to be very strict about using their native language at home and/or enroll their children in weekend language classes which take away time from their friends and sports activities. However, children who don’t learn their parents’ language almost always regret it when they are older because they cannot communicate with their grandparents or visit their home countries without being very embarrassed.  She also shared research that shows that growing up bilingual helps children develop cognitive skills including learning languages better, multitasking, and even delaying Alzheimers!  Bilingual children also get better jobs when they are older, communicate better with their extended families and have a stronger cultural identity.

Yoshiko Murahata from Mukogawa Fort Wright Institute in Spokane, WA shared some original research on categorization.  This type of research stems from the classic and controversial Sapir-Whorf hypothesis from the 1950s which claims that language use influences cognitive processes. For example, in one recent study, Western and Asian subjects were shown four squares of several shades of blue.  They were asked if there were one blue or two blues.  Most Westerners said there was one blue.  Japanese speakers more often said that there were two different blues because – one theorizes – that there are two different words for blue in Japanese: “ao” for dark blue, and “mizuiro” for light blue.  Of course, we can say “dark blue” and “light blue” but apparently English speakers still conceptualize them as one color.

In another study, subjects were shown three drawings of a cow, a sheep, and a carton of milk arranged in the shape of a triangle with the cow on top.  Subjects were asked to rate the similarity of each pair of items.  Apparently Westerners tend to group the cow with the sheep – since they are both animals, – while Asians tend to group the cow with the milk – since cows produce milk.  It seems that Westerners tend to recognize taxonomic relationships while Asians recognize thematic relationships.  Ms. Murahata repeated with experiment with drawings of a monkey, a panda and a banana (among 20 other experiments).  Again, Westerners grouped the monkey with the panda, while Asians paired the monkey with the banana.  We in the audience were surprised that Americans would not associate the cow with the milk and the monkey with the banana given our cultural experiences as children.  However, the data seem to indicate otherwise. Even more remarkable, Japanese learners of English switch from thematic to taxonomic groupings as their English proficiency nears that of a native speaker, theoretically because their language is changing how they categorize objects.

The plenary speaker was Christina Cavage from Savannah Technical College in Savannah, GA.  She gave a very nice talk on blended learning.  She provided dozens of examples of the benefits of using technology in the classroom to ESL learners.  She showed how students can learn from watching YouTube videos, online grammar exercises, computerized pronunciation lessons, etc.  I did not catch all of her statistics, but she had some impressive data showing how students in blended classrooms learn more, score higher on standardized tests and enjoy learning more as compared to students with traditional textbook learning.  She also told a funny story about a Filipina Catholic nun – no joke.  She said when she taught in New Jersey she used some software that allows students to record their own voices to practice their pronunciation. She could then listen to the students’ recordings and keep track of how many times each student practiced the exercises.  Normally, the students would practice each exercise three or four times to get it right.  However, she noticed that the Filipina nun did each exercise about 40 times!  Curious, she listened to the recordings and she heard her student record her voice, then another nun record her voice, and another nun, and another… It turned out the whole convent of nuns was practicing their English pronunciation with the student’s homework exercise!

Just shows you how valuable our lessons are to students who really want to learn. 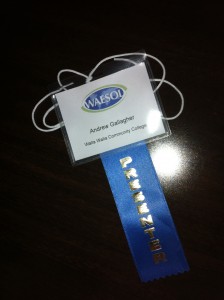 Next time:  Back on track with metaphors from the news…