A few weeks ago, I wrote a post about metaphors derived from clothing accessories, inspired from an article in The Atlantic magazine talking about the Sun Belt.  After several detours around shutdown metaphors and a conference presentation, I present here a follow up post on clothing metaphors.  Many political metaphors are derived from our experience with the clothes that we wear at home and at work.  As many of us pull out warmer clothes for the fall weather, here is a salute to clothing metaphors.

A mantle is the name for a type of cloak not usually worn today.  It was a heavy garment that covered the shoulders to keep a person warm in cold weather.  In popular terms, a mantle is something that it is difficult to carry.

Example:  In 2008, the American voters had to wear the mantle of electing someone who could solve the nation’s economic crisis.

Another term using the idea of a cloak is dismantle, meaning to remove a burden from someone.   Historically, it also meant to attack and tear down a military fortress. In modern terms, dismantle means to take something apart. 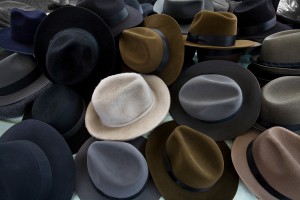 Different hats are worn for different purposes and different occupations, e.g., a baseball cap for sports, a hard hat for construction workers, a fancy hat for a businessman.  The idea of wearing many hats indicates that one person has many jobs or tasks in a certain organization.

Example:  The U.S. president has to wear many hats so that he can solve economic, military and social problems.

In the United States, men normally wear suits and ties if they are professional businessmen.  In politics, an empty suit is someone who dresses as if he is professional but does not get any work done.

Example:  In the 2008 election, some critics accused Barack Obama of being an empty suit since he had very little executive experience before running for president.

A skirt is a garment worn by women below the waist.  The term outskirts means an area beyond the skirt or central region of a city.

Example:  During the Iraq War, there was a great deal of fighting on the outskirts of Baghdad.

All clothing made in a factory carry the label of which company or designer made the garment.  Cans or boxes of food or other items are also clearly labeled for sale in stores. In popular terms, any person or organization can be labeled according the main features or principles involved.

Example:  Barack Obama was labeled as an elitist because he graduated from Harvard. 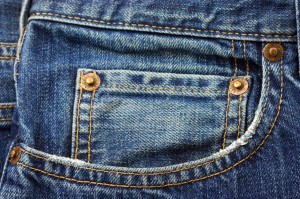 A pocket is a small section of a shirt, dress, pants, or coat to hold small objects.  In metaphorical terms, a pocket is any small area distinctive from other nearby areas.

Example:  Although America is a rich country, there are also many pockets of poverty, especially in big cities.

The collar is the top part of a shirt.  In some manufacturing jobs, the workers are required to wear uniforms, usually including pale blue shirts.  These jobs came to be known as blue collar jobs.

Example:  Presidential candidates must be sure to gain the support of blue-collar workers who make up most of the middle class in America.

People working in business tend to wear white shirts and dress clothing.  The jobs of these workers came to be known as white-collar jobs. 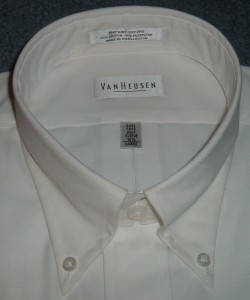 Example:  Poor people often complain that normal people who commit crimes always go to prison, but white-collar crimes go unpunished if the perpetrators can afford a good lawyer to get them off.

The cuff is the bottom part of the sleeve of the shirt.  The phase to say something off the cuff means to speak without any previous preparation, perhaps due to someone writing notes on his arm or sleeves.

Example:  Presidential debates are very revealing because the candidates must speak off the cuff and not rely on prepared speeches; this way we can hear what they are really thinking.

Next time:  A home run!  Metaphors of baseball.

2 thoughts on “Empty Suits and Pockets of Poverty: Clothing Metaphors”