Since we are in the middle of the action of the exciting World Series between the Boston Red Sox and the St. Louis Cardinals, I thought I should share a few baseball metaphors.  Even though there are not many baseball metaphors that I could find, they are very commonly used, perhaps due to the popularity of “American’s national pastime.”   Here are a few metaphors I am sure you have heard before.

Baseball teams are organized into different leagues.  The professional players play in what is called the major leagues.  In politics, we may say that people who are elected high office in the government such as the House of Representatives or the Senate are playing in the major leagues.

Example:  After her loss with John McCain in 2008, Sarah Palin was criticized by some who said that she was not ready for the major leagues.

Amateur baseball players who are trying to get into the major leagues play in what are called farm teams or bush leagues, since they are often located in the rural areas.  In politics, to say that someone is in the bush leagues, or makes a bush-league mistake, means that he or she is inexperienced or incompetent at what they do.

Example:  Critics of Barack Obama claim that his handling of the economic crisis in 2008 was a filled with bush-league mistakes.

On baseball fields, it is important to keep the fast, dangerous pitches of balls from hurting any spectators.  Thus, behind the batter and catcher is a tall fence called a backstop.  In common terms, a backstop is a person or group of people who support someone else in their work.

Example:  When the U.S. government bailed out banks in 2009, taxpayer money was used to backstop further potential losses by those financial institutions.

a swing and a miss

In baseball, a batter must swing and hit a pitch thrown past him. These pitches can be thrown very fast or made to curve so they are very difficult to hit.  When a batter misses a pitch, this is known as a swing and a miss.  In politics, a swing and a miss may be an attempt by someone to accomplish something that does not succeed.

Example:  Bill Clinton’s attempt at revising the American health care system was a swing and a miss since the bills were not passed by Congress.

To be flat footed literally means that a person does not have arches on the bottom of his or her feet so the feet hit the ground flatly instead of on a curve.  In baseball, a fielder must always to be in a standing position ready to run to catch the ball.  A person throwing the ball must also have the feet spread apart and use the body to create enough leverage to throw the ball with force.  To be flat footed, therefore means to be unprepared to do one’s job or to make a weak effort at something.

Example:  Presidential candidates must always be prepared with good answers to important questions during debates.  They must not be caught flat footed or else they might embarrass themselves on national television.

Example:  Critics of Barack Obama complained he was guilty of political grandstanding after quickly taking credit for the killing of Osama bin Laden.

step up to the plate

Example:  In 2012, Mitt Romney stepped up to the plate to run for the president of the United States against Barack Obama.

A home run in baseball occurs when a player hits the ball out of the park or deep enough into the outfield that he can run around all four bases and return home.  This is the best possible hit that a batter can make.  Figuratively, a home run is anything that is a great success for a person or group.

Example:  Tracking down and killing the most wanted terrorist in the world, Osama bin Laden, was a political home run for Barack Obama. 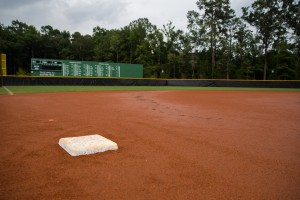 born on third base

If a baseball player makes a hit and advances all the way to third base, we say that he has hit a triple.  In 1986, former Dallas Cowboy football coach Barry Switzer coined a new metaphorical saying to describe people who were born rich but acted as if they developed their own income through hard work. He described such people by saying, “Some people are born on third base and go through life thinking they made a triple.”  At the 1988 Democratic Convention, Texas politician Jim Hightower described George W. Bush as being out of touch with ordinary people by using the same saying.  More recently, actor/activist Martin Sheen expressed the same sentiments about Mitt Romney.

Example:  In 2012, Martin Sheen said of Mitt Romney, “He was born on third base and thought he hit a triple.”