This is the season when families and friends get together to celebrate the holidays.  Often we make large meals to share and may indulge a bit too much.  As we are digesting our dinners, here are a few political metaphors derived from terms and phrases concerning food.

Bread is a common food in American households.  A breadwinner is someone who earns money and is able to buy the food for the family.

Example:  Politicians must be aware that in tough economic times, both parents must be the breadwinners in a family to be able to support their children.

For many years, most Americans have eaten a diet which most often included some sort of meat for protein and potatoes for carbohydrates.  Typically a family will also have fresh bread with butter as a side dish.  Thus, these dishes have become symbolic of an everyday people and events.  In politics, a common problem is considered to be a meat-and-potato or bread-and-butter issue.

Example:  Most network televisions news shows just give the meat and potatoes of the day’s news.  You need to read a newspaper or the Internet to get more details.

Example:  During the 2012 presidential campaign, the economy was a bread-and-butter issue for Mitt Romney.

When bread is cooked in toaster or oven, it is called toast.  Metaphorically, something that is completed finished or failed is also called toast.

Example:  Political campaigns are so expensive these days, if a candidate does not raise enough money to pay for television ads, his or her campaign will be toast and another candidate will win the election. 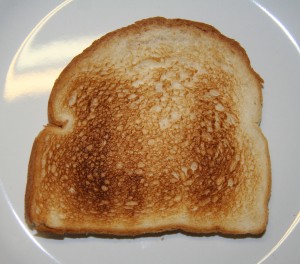 Bread that is toasted too long may become hard and crusty.  In popular terms, a crusty person is someone who tends to be old, mean spirited and unwilling to change.

Example:  Compared to the young Barack Obama, John McCain was considered by some to be a “crusty old man” of his critics during the 2008 presidential election.

Many Americans enjoy eating fresh cuts of meat, especially beef steaks.  When the meat is fresh, it still retains the blood from the animal, giving it a red color.  Metaphorically, red meat symbolizes raw emotions or very important issues.

Example:  Presidential debates often include questions about red-meat issues such as national security policies and views on abortion.

When a person is hungry, one needs to have a substantial meal with a good amount of protein, usually in the form of meat.  A meaty dinner is one which contains a large amount of meat to satisfy the hunger of the people.  A meaty question is one that addresses a complex issue and will require a thoughtful response.

Example:  During a campaign, news reporters need to ask meaty questions about important issues, and not easy questions that do not reveal the candidate’s opinions and policy views.

Example:  During a presidential campaign, reporters might complain if the candidates describe a new policy without much meat on the bones.

One of the most common food metaphors in American politics is the pork-barrel project, the process by which Senators and members of the House of Representatives working in Washington D.C. obtain funding for projects in their home states or districts.  This process is always controversial since millions of dollars are spent on projects which sometimes only benefit a few people.  The origin of the term derives from the practice of plantation owners in the early 1800s of feeding their slaves with pork preserved in large wooden barrels.  The barrels would be brought to the slaves who would fight over the amount of meat in the barrel, trying to get enough for each of their families.  In later days, the term would be used to describe members of Congress trying to get enough of federal tax money to bring home to their home districts.

Example:  Americans like to complain about too much pork-barrel spending in Washington, but they don’t complain when their representatives obtain money for a new highway or hospital in their home town. 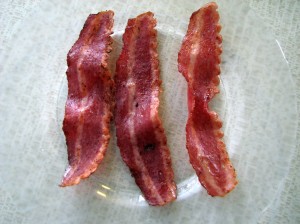 Traditionally, in an American family, the husband or father is the person earning the most income for the family.  Thus, the father brings home the paycheck to support the family.  Although the origins of the phrase bring home the bacon are unclear, it seems to have been derived from the practice of a man winning or earning a substantial amount of meat to bring home to feed his family.

Example:  While many American men are the main wage earners in their families, today, many women are bringing home the bacon.  Politicians must consider childcare and maternity leave issues when women are working full time while taking care of their children.

The phrase egg on actually has nothing to do with eggs so technically it is not a metaphor, but I thought I should include it here for the sake of completeness.   The phrase comes from a word from the Old Norse language meaning to encourage or incite someone to do something.

Example:  In some countries, protests against the government are common.  Politicians trying to overthrow the government may be egged on by protesters in big cities. 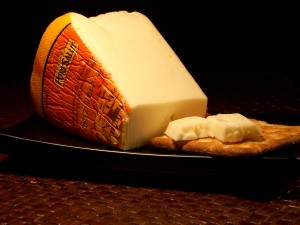 An important person is sometimes called a big cheese.  Apparently, the origin of this phrase had nothing to do with cheese.  British soldiers in India in the 1840s had an expression that’s the thing meaning “that is correct.”  A Persian word chiz was used to replace the word thing, changing the phrase to that’s the chiz.  Later the phrase changed to the big chiz, or in modern spelling, the big cheese, meaning the best or correct thing.  However, today the phrase indicates an important person, sometimes in a positive sense of someone who is essential to a company or group of people, but also sometimes in a negative sense as in someone who abuses his power.

Example:  As president of the United States, Barack Obama is always the biggest cheese in the country.

American meals may be divided into main courses, such as the meat, potatoes or rice, or the side dishes such as salads, breads or vegetables.  In politics, the principal issue in a debate may be called the main course, while a less important topic may be called a side dish.

Example:  In the 2012 presidential debates, the economy was the main course of the conversations, while the War in Afghanistan became the side dish.

Pickles are cucumbers that have been soaked in a mixture of salt water and spices called a brine.  Originally, the brine was called the pickle, so the phrase to be in a pickle meant to be in a bad situation.  In politics, someone said to be in a pickle is in trouble with voters or other politicians or just in a difficult situation.

Example:  In 2013, Barack Obama found himself in a pickle when the website for the Affordable Care Act was filled with glitches and people could not enroll in the program.

Example:  Sometimes liberals refer to right wing Republicans as nut jobs if they support wars and tax breaks for rich companies.  Then again, Republicans may refer to liberals as nut cases if they protest wars and spend millions of dollars on social programs.

Next time:  Desserts and Drinks!