As the 2014 Sochi Olympics wind down this week and everyone is counting their country’s gold, silver and bronze medals, I thought I would offer a short blog post on metaphors derived from our experience with the colors of silver and gold. 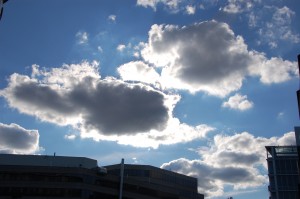 Silver and gold are both names for colors and names of precious metals.  Thus they are used to describe things that are very valuable.   There is an old expression that every cloud has a silver lining.  This phrase is thought to come from the fact that even dark clouds may have sunlight coming through along the edge giving a silver look to it. This in turn means that even though the sky is dark, the sun is still there and will shine again.  Metaphorically, a silver lining means that even when life is bad, good things can still happen so we need to stay hopeful.

Example:  When the economy is bad and many people lose their jobs, one silver lining is that prices for many items such as houses, cars and gasoline actually go down.

Example: Barack Obama proved himself to be a silver-tongued politician during the 2008 and 2012 presidential elections.

Example:  During Ronald Reagan’s presidency, Republicans thought he was the best president ever; he was absolutely golden.

Example:  John F. Kennedy, Jr., the son of the late 35th U.S. president, was considered America’s golden boy until his tragic death in 1999 at the age of 38.

When a business executive retires, he or she is often given a sum of money as a retirement gift.  In some cases, these gifts amount to millions of dollars.  These gifts are sometimes called golden parachutes because they allow the person to retire as if they are jumping from an airplane and landing safely in retirement.

Example:  American citizens become angry when they learn that some business executives get million-dollar golden parachutes even though their companies went bankrupt and investors lost a great deal of money.

In many American elementary schools, children are given a gold star sticker on their schoolwork meaning that the work was very good.  In popular terms, anything that has high quality can also be described as being gold star.

Example:  The Kennedy family has a gold-star reputation in the United States because of the many contributions their family members have made to American politics.

When a soldier is killed in a war, his or her family receives a gold star made from paper that they can put in the front window of their home indicating their loss.  Thus gold star families are those who have lost a family member in military service.

Next time:  Metaphors of Metals