Spring has sprung in many parts of the country.  Flowers are blooming and grass is starting to turn green.  To mark the occasion, I thought I would describe a few metaphors based on plants and trees.  Enjoy!

Plants and trees are commonly used in English metaphors.  One of the most common is the familiar term of the family tree, comparing the relatives in a family to the branches of a tree.

Example:  Michelle Obama’s family tree indicates that she is the first person descended from a slave to be a first lady of the United States. 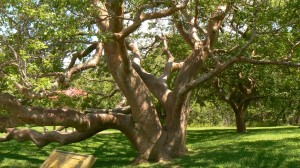 Example:  The United States has three branches of government – the executive, the legislative and the judicial.

Trees have roots that not only hold the tree into the ground but symbolize the beginnings of the tree’s growth.  The concept of roots is commonly used metaphorically to mean the origin of something.

Example:  The root of the economic recession of 2008 can be found in the failures of Wall Street investment firms to manage their money properly.

A tree with deep roots is one that is very old and solidly anchored into the ground.  Metaphorically, a problem or attitude that is deep-rooted indicates that it is something that goes back many years and is not likely to change any time soon.

Example:  Due to the lack of positive changes for the average person made by Congress, many Americans have a deep-rooted cynicism of politicians.

All plants have some sort of root structure.  Grass is one of the most common plants in the world and its roots are spread evenly under the ground.  In politics, a grassroots organization is one that originated by ordinary people, not developed by a larger political party or organization.

Example:  Although millions of Americans created support networks for Barack Obama in the 2008 election, many of those grassroots organizations were dying off and looking for new members for the 2012 election. 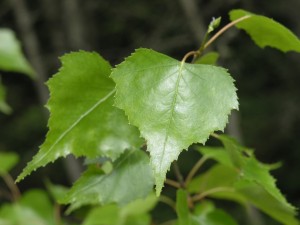 Trees have thousands of leaves.  The idea of a leaf is used commonly to describe pages in a book.  Small pieces of paper are also called leaflets and are often used to distribute information in an election.

Example:  If you go to a candidate’s campaign rally in a presidential election, you may receive a leaflet describing the candidate’s best qualities and political experience. 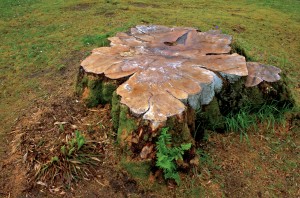 When a tree is cut down, the remaining part of the trunk standing a few feet off the ground is called a stump.  Before the days of microphones and amplified sound, political candidates had to shout their speeches from a stage or platform.  In a small town with no such structures, candidates had to stand on the top of tree stumps to give their talks to the local people.  These became known as stump speeches.  Nowadays, any type of speech from a candidate during a campaign may be called a stump speech.

Some trees ooze a liquid from their trunk called sap which can be used to make special products such as maple syrup or even rubber. In the belief that this leaking of sap weakens the tree, the verb sap carries the meaning of weakening something or someone of their stores of energy.  In politics, the positive forward energy in a campaign is called momentum.  A crisis or embarrassing event may sap the campaign of its momentum.

Example:  Although Hillary Clinton had a great deal of followers in the early days of the Democratic primary in 2007, Barack Obama’s popularity sapped the momentum of her campaign. 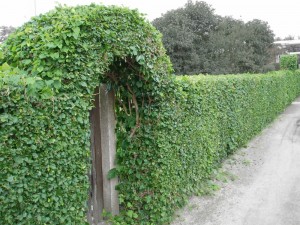 A hedge is a row of bushes usually grown specifically to form a boundary or fence line on a person’s property to keep animals in or people out. The idea of a hedge to provide security or protection has led to figurative language such as hedging one’s bets meaning to protect oneself from losing too much money in a bet.  The same idea is used in the type of investments called hedge funds which are also designed to decrease the risk of money lost in an investment.

Example:  After the 2008 economic crisis, many Americans asked the government to increase the taxes paid by billionaire hedge fund managers on Wall Street.

Plants are attached to the ground through the roots.  They grow and produce blossoms or fruit from the stem.  Metaphorically, the origin of something may be described as stemming from an event, process or project.

Example:  In late 2011, the approval rating for Congress dropped to only 9%.  The frustration with Congress stems from the fact that Republicans and Democrats can never seem to agree on anything and do not pass any laws to help the American people.

Some plants have small branches or shoots that grow out of the main stem or trunk.  These can also be called offshoots.  In common terms, an offshoot is anything that develops out of something else.

Example:  In the war on terror, American presidents must monitor not only the main terrorist organizations but their offshoots around the world as well.

Next time:  Metaphors of Plains, Mountains, and Valleys

2 thoughts on “Metaphors of Plants and Trees”