The presentation of the Academy Awards last week inspired me to share a post of metaphors based on acting. Today I would like to continue in the same theme, sharing a few more metaphors based on the physical settings and events held in theaters around the world.

The modern forms of campaigning and governing easily allow comparisons to theatrical productions. Metaphorically, American politics is sometimes known as political theater, especially when it appears that politicians give speeches or vote on bills in Congress that seem only for show, not for substantive governmental policy decisions.

Example: In Barack Obama’s first few years as president, Democrats accused Republicans of engaging in political theater when they seemed to filibuster or block all Democratic bills in Congress.

Beauty contests are popular competitions to determine who is the most beautiful among a large group of women. Since all presidential candidates must be handsome men or attractive women, critics complain that our modern elections are nothing more than beauty contests.

Example: Democratic and Republican primaries often seem to be beauty contests instead of discussions of the most important issues of the day. 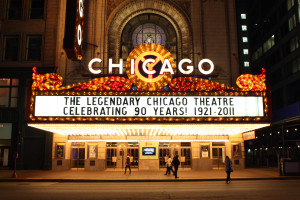 A theater or movie house will normally put the name of the current show along with famous actors’ names on a large electric board called a marquee. The name is usually above the doors of the building and well lit, thus we say that each name is up in lights. Metaphorically, a person who becomes famous will have his or her name up in lights.

Example: One wonders if some members of Congress really ran for office for public service or simply to have their name up in lights. 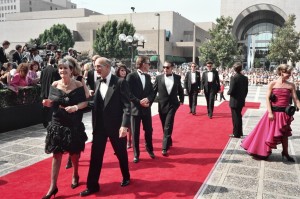 For the opening of some important movies or plays, a long roll of red carpeting was traditionally laid out in front of the building. The famous actors, directors and producers would then walk on this red carpet to be cheered by adoring fans. Metaphorically, rolling out the red carpet means that someone is providing an exceptionally warm welcome to someone important.

Example: Critics complain that too many Senators and members of Congress roll out the red carpet for lobbyists from large corporations and expect them to pass laws in their favor.

Spectators at a play or movie can be shown to their seats by helpers known as ushers. We say that these spectators are ushered into the theater. Figuratively, when a new policy or program is being introduced, we may say that it is being ushered in.

Example: The Citizens United Supreme Court decision in 2010 ushered in a new era of corporate contributions to political candidates.

The word fanfare carries many meanings. It originally meant loud talking or chattering. Later it came to mean a loud, showy display or introductory music played by trumpets. In politics, an important vote, decision or event may be covered widely in the newspapers, magazines, and television and radio shows. This may also be described as being part of a great fanfare.

Example: Republican policies towards women’s health care were front and center on the minds of women voters in 2012.

Putting on a live theater production is sometimes called staging a performance. In politics, when candidates arrange a speech, interview or debate to be on national television, we may also refer to this as staging an event.

Example: Many presidential candidates are good at staging town hall meetings to talk to local people about the issues.

When celebrities or politicians become world famous, we say that they are figuratively playing on an international or world stage.

Example: When Barack Obama picked Hillary Clinton to be Secretary of State in 2008, she became an important player on the world stage of diplomacy.

When a play is being performed, many stagehands or assistants are busy behind the curtain getting the actors and sets ready for the next scene. This might be called backstage maneuvering. Metaphorically, any meetings or decisions that are made in secret may be referred to as backstage maneuvering.

Example: Often bills are passed in Congress after hours of backstage maneuvering by leading members of Congressional committees.

Another way of describing the work of stage hands during a play is say it is behind-the-scenes work. In politics, many deals are made behind the scenes as well.

Example: Tracking down and killing Osama bin Laden was accomplished with many behind-the-scenes intelligence gathering and strategies by the Obama administration. 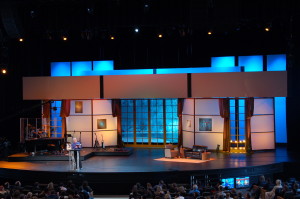 Example: Presidential candidates often give speeches about reducing unemployment against a backdrop of closed factories in Midwestern towns.

Theaters normally have strong lights that they can point anywhere on the stage. If a light is used to illuminate one small scene, this is called shining a spotlight on the scene. Metaphorically, being in the spotlight means being the center of attention.

Example: During the 2012 presidential election, Mitt Romney’s tax records were in the spotlight for many months.

When a play is about to begin, the theater raises the main curtain so the audience can see the actors and the sets. Metaphorically, raising the curtain on something means to begin a process, or to reveal information that was not announced previously.

When a play or musical is concluded in a theater, the curtain is lowered. Figuratively, lowering the curtain indicates the end of a process or program.

Example: Many Americans were glad when the U.S. government was able to lower the curtain on the War in Iraq in 2011.

It is hard to believe that there are so many comparisons made between politics and theater performances. It reminds us how much our politicians must be very gifted at public speaking, back room deals and acting out parts for the benefit of campaign donors and voters. One wonders how much our politicians truly want to help American citizens or how much they want to be in the spotlight…

Next time: Casting a Net for Terrorists