In honor of Martin Luther King, Jr. Day this year, I would like to note a couple milestones. For the blog, I recently passed the mark of writing this blog for five years. Gulp! Seems like only yesterday that I started writing these blog posts. There have been more than 550,000 views from 198 countries. Not too shabby for an academic blog, eh? I have to thank Martin Luther King, Jr. for a great deal of interest in the blog. Apparently, every high school and college student in the world must do research on the metaphors of MLK’s speeches, especially his “I Have a Dream Speech” which remains, by far, my most popular post.

More importantly, last year marked an incredible resurgence in popular uprisings by ordinary people. And this year will mark the 50th anniversary of Martin Luther King, Jr. being assassinated in April 1968. Anyone who has studied the life and work of MLK knows that he always hoped that ordinary people would rise up and fight for justice. Martin Luther King, Jr. famously said that “the arc of the moral universe is long but it bends towards justice.” Although there were a few protests by ultra conservatives such as the alt-right protests in Charlottesville, Virginia, most of the protests were for liberal causes including women’s rights, racial equality, better treatment of minorities by police, gender equality, income equality, the right to affordable health insurance, and fair immigration policies just to name a few. 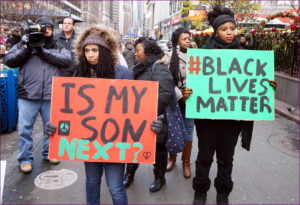 Although we remember Martin Luther King, Jr. for his historic speeches and his work for the creation of the Civil Rights Act of 1964, let us not forget that he was leading nonviolent protests for all sorts of discrimination and injustice. The night before he was assassinated in Memphis, Tennessee, he had been helping sanitation workers organize a strike for safer working conditions and higher wages. At that time he said, “We’ve got to give ourselves to this struggle until the end.  Nothing would be more tragic than to stop at this point in Memphis. We’ve got to see it through.”   A few weeks earlier, he was quoted as saying, “You are demonstrating that we can stick together. You are demonstrating that we are all tied in a single garment of destiny, and that if one black person suffers, if one black person is down, we are all down.”  (See the excellent encyclopedia on Dr. King at Stanford for more information.)

Here again we have another beautiful example of an MLK metaphor – “tied in a single garment of destiny.” I believe Martin Luther King, Jr. would be proud of all the protesters around the world fighting for justice for everyone.

So, what does all of this have to do with metaphors? I have noticed that many of the terms and phrases used to describe these protests are indeed metaphors. In fact, most of these metaphors are from the category of what I call body position or physical forces such as stand, stand up, resist, push, pull, strike back, etc.

For example, an online article by CNN reported that people in St. Louis last September protesting police brutality shouted that they were going to “stand up” and “fight back.”

Last January, the USA today reported that a man supporting his wife and daughters at the Women’s March in Washington D.C. stated the following:

Example: “It feels really important to stand up for civil society when powerful voices are lined up against it.”

The Washington Post published a headline last January on how the Democrats were going to push back against President Trump’s ban on Muslims:

Many papers reported on how corporations were going to pull ads from NFL games after many players were taking a knee to protests police treatment of African Americans. The Business Insider published the following headline this past November:

Another common metaphor used to describe the protests is to resist or create resistance. Some protest organizations label themselves as “the Resistance.” The Washington Post again had the headline:

On occasion, protesters are described as striking back against those who are oppressing them. Last August, fast food workers, airport employees and others fighting for higher wages planned protests in Chicago on Labor Day:

Not surprisingly, the people perceived as the oppressors were also described as using physical forces to gain back their power. Breitbart News reported in September:

Example: NFL Sponsors Starting to Push Back Over Anthem Protests

The news was filled with such metaphors last year as protests erupted over Donald Trump winning the presidency and his subsequent policy decisions. Here are a few more examples of the metaphors of body position and physical forces are used to describe politics in recent years.

When people stand up, they have their maximum height and are in the best position for taking action or doing something. Thus, we have many metaphors about standing.

Example: During World War II, England, France and the United States stood up against the armies of Hitler.

Example: Martin Luther King, Jr. took a stand against the discrimination of African-Americans in the 1960s. 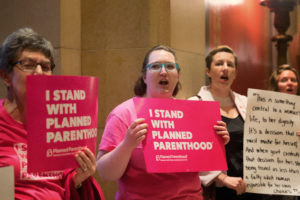 Example: During a presidential campaign, a candidate must make clear where he or she stands on the important issues such as the economy and national defense.

Example: During the Cold War, there was a standoff between the United States and the Soviet Union.

Example: The Bush administration took the stance that the War in Iraq was necessary to remove the dictator Saddam Hussein.

If something is longstanding, it is something that has been happening for a long time.

Example: Martin Luther King, Jr. was a powerful leader who took a stand against the longstanding civil rights abuses in the South and elsewhere in the United States.

To have a posture is similar to taking a stance for or against something.

Example: The United Nations has always had the posture of protecting civil rights around the world.

Example: Critics of the War in Iraq accused President Bush of pushing America into war without valid reasons for national security.

When someone pushes against another person, the second person may push back to avoid being knocked down. Metaphorically, pushing back means to resist being pushed over by an outside force.

Example: To his credit, when Iraqi forces challenged American troops, President Bush pushed back and helped win the war. 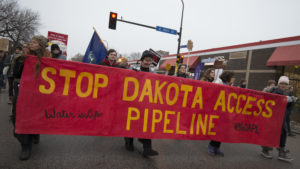 Example: President Obama pushed for health care reform in the first few years of his presidency.

A specific use of the push motion is in the phrase push poll. Normally in election years polling is done with neutral questions to determine opinions about issues or candidates. If the questions are misleading or designed to favor one candidate over another, we call these push polls, since the pollsters are pushing their opinions on to the those they are interviewing.

Example: Although no one approves of push polls, sometimes they can be used to persuade voters to change their minds about a candidate in a presidential election.

Another word for push is propel. People or machines can propel objects or individuals with physical force. In politics, scandals, economic problems, military events or voters groups can propel a politician to win an election. Usually there is a positive upward connotation to the meaning of propel.

Example: Latino voters helped propel Barack Obama to victory in both 2008 and 2012.

The opposite of push is to pull, to move an object closer to the person instead of farther away. In metaphors, the pulling motion is used to describe many abstract activities.

Example: Many American voters wanted the U.S. government to pull back their troops from Afghanistan instead of adding more troops.

The word yank means to pull with great force or speed. In politics, donors or voters may yank their support for a candidate if he or she disappoints them with words or actions.

Example: Some conservative voters yanked their support for Rick Perry after disappointing debate performances in the 2011 Republican primaries. 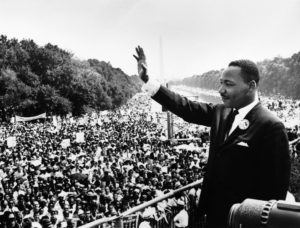 Another word with a similar meaning of pull is to draw. A politician can draw support or draw crowds because of his or her speaking abilities.

Hitting an object with one’s fist or with a weapon is a very common physical motion. Metaphors based on this motion are covered in the chapters on Boxing and Military. Here are a few more examples.

Another word for hit is to strike. Metaphorically we often hear this term used in the phrase to strike back when someone is verbally arguing with someone.

Example: Mitt Romney struck back against charges that he does not pay his fair share of taxes.

To strike down means to revoke a law or current policy.

Example: Everyone expected the Supreme Court to strike down Obama’s health care program in 2012. Surprisingly they supported it.

Example: In 2012, President Obama tried to crack down on oil speculators, investors who were trying to make a profit from rising gas prices.

To press something means to push downwards or outwards on an object. Metaphorically, to press can also mean to verbally push a group of people towards a certain action.

Example: American presidents may have to press Congress to pass laws that his or her party has submitted.

The noun form of press is pressure, meaning an amount of force pushing down on an object. In common terms pressure can mean any type of force applied to a person or group by circumstance or another group of people. The most common phrases used are to be under pressure or keep pressure on something. Pressure may also be used as a verb with a similar meaning to press.

Example: During a recession, a U.S. president is constantly under pressure from the American people to create more jobs and revive the economy.

Example: During a presidential election, candidates often try to tamp down criticisms that might make them look like they are not the best person for the job.

As I have said many times in this space, it is surprising how many metaphors of violence are used to describe our politics. Reading these examples, it reminds me of how confrontational we are as a people, both figuratively in the halls of Congress and in the media, as well as literally in the streets when protestors face off against the police. It happens not just in America, but all over the world. Ironically, Martin Luther King, Jr. insisted on nonviolent protests but the very words we use to describe peaceful protests are derived from physical actions. We can only hope that Dr. King’s desire of equality for all people in the United States and around the world – tied in single garment of destiny – is some day realized without further protest or bloodshed.