Metonymy (pronounced meh-TAHN-uh-me) and synecdoche (sih-NECK-duh-key) are two specialized forms of figurative language. Metonymy occurs when a word for a feature of something is used to represent the entire concept.  For example, in the famous phrase the pen is mightier than the sword, the pen represents writing and the sword represents fighting. 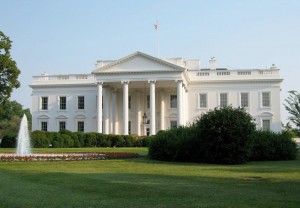 The White House is the place where the U.S. president lives.  The name of this residence is used to represent the statements, policies, programs and government of the United States. When a proper name is used as a metonym, technically this is called a toponym.  Metonymy thus includes both common nouns and toponyms.

Example:  On May 2, 2011, the White House issued a statement that Osama bin Laden had been killed.

Most small towns in America have a principal road in their downtown area known as Main Street.  Symbolically, Main Street represents all aspects of small town life.

As mentioned, synecdoche is a special form of figurative language.  Synecdoche has many complex patterns of usage, but our purposes here, we can say that it occurs when a part of something represents a whole.  For example, in the sailing phrase all hands on deck, the hands represent the sailors who will be doing the work.

In a common expression of the quantity of military troops, we say that we have boots on the ground.  The boots refer to the soldiers wearing the boots.  Similarly, the training grounds for new soldiers is sometimes called boot camp for the same reason.

Example:  In 2007, President Bush requested more boots on the ground to help win the War in Iraq.  This troop surge eventually did lead to the end of the war.

In the Middle Ages, judges sat on a wooden bench.  The bench itself has come to represent an entire court or legal system.  Supreme Court Justices are said to sit on or read their verdicts from the bench.

Example:  In 2010, Barack Obama nominated Elena Kagan to the bench of the Supreme Court.

A lobby is the main entryway in a large building.  In the early days of American government, people wishing to gain favor from politicians waited in the lobbies of governmental buildings to visit the legislators.  Later the term lobbyist referred to these people hoping from special favors from the government.

Example:  Health care advocates claim that tobacco company lobbyists kept the dangers of smoking from public view for many decades.

Next time:  Balancing the budget and other metaphors derived from physical forces