Last week I heard a journalist explain that the Republicans had a big tent problem.  Given that the party seems to be fractured into two divisions of traditional Republicans and more conservative Tea Party Republicans, there does not seem to a unified party.  And after their defeat in the 2012 presidential election, some pundits complained that the Republicans were not reaching the Latino or African-American voters.  Not being able to include all Americans in their policies amounts to having a big tent problem, as if a circus cannot include all of its acts under one tent. 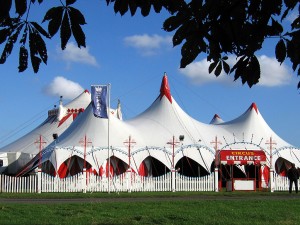 Several aspects of our American political system are often compared to circus acts or performers.  We may hear of juggling, a dog and pony show or fire-breathing politicians. More commonly, many discussions of entitlement programs for the poor such as food stamps refer to the safety nets used by trapeze artists in a circus.

Tents are held up by the poles at the corners or perhaps the center.  In metaphorical terms, the tent poles of a political party or organization are the principle ideas of that group.

Juggling is the act of one person (sometimes two) throwing and catching many balls as they travel through the air.  One can also juggle many tasks or duties at one time if one is very busy.

Example: The U.S. president must be good at juggling many different executive responsibilities at one time. 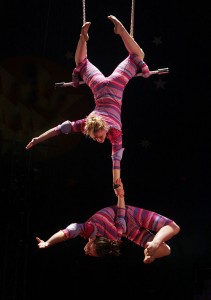 In some circuses, a person holds a flaming torch and spits out a flammable material so that it burns very high and bright.  These performers are called fire breathers.  In politics, a person is very determined to get something done may also be called a fire-breathing politician.

Example: Some fire-breathing progressives want to take all the money from the defense budget and give it to education.

Animals are often used in circus performances.  One of the most common routines is to have dogs and ponies do tricks for the audience.  This is called a dog and pony show.  In politics, a dog and pony show is any event that seems to be performed for the sake of fooling someone, not representing the real truth of how something works.

Example: When members of the U.S. Congress go overseas to visit other countries, they are often treated to a dog and pony show by local officials, boasting how good their countries are, when they may actually be very corrupt.

When circus performers do tricks high in the air, such as those done by trapeze artists, a large net is stretched below them to catch them in case they fall. This is called a safety net.  In political terms, a safety net is anything that helps people out of financial or legal dangers.

Example: The U.S. welfare system, in which the government provides money to low income families, is a safety net for people who lost their jobs and cannot pay their bills.

Someone at a circus or carnival who tries to sell things to people for high prices which may not be worth anything, is called a huckster.  In politics, a person who conducts illegal business activities may also be called a huckster.

Example: Some people say that the banking crisis of 2008 was caused by Wall Street hucksters who made too many bad investments and lost too much money.

Next time:  Beefing Up Security:  Metaphors from Down on the Farm