This coming Wednesday will mark the 50th anniversary of Dr. Martin Luther King Jr.’s “I Have a Dream” speech from August 28th, 1963.  The speech was the high point of the march on Washington attended by approximately 300,000 people, intended to improve civil rights for blacks and minorities in the United States.   Dr. King’s speech and the march spurred the U.S. Congress to pass the Civil Rights Act of 1964 and the Voting Rights Act of 1965. 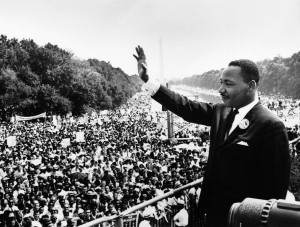 Now recognized as one of the most powerful speeches of the 20th century, Dr. King’s speech was a masterpiece of political rhetoric.  For the past few days, historians and television pundits have been analyzing the importance of the speech and the march.  I would like to add a brief analysis of the metaphors used in the speech.  Dr. King was not only academically trained – he earned a Ph.D. in theology from Boston University – he was also a Baptist minister.  His education, along with his skills as a preacher, helped him become one of the most gifted orators of modern times.   He was also a master of using metaphors to make a point in his speeches.  The “I Have a Dream” speech is a “goldmine” of metaphors.  I will break down some of his most important metaphors into semantic categories such as banking, food and drink, buildings, music and nature.  I will highlight the metaphors with boldface and italic type.

One of the most explicit metaphors he uses to make his point about the lack of civil rights is a banking metaphor.  He suggests that the thousands of marchers have come to Washington to cash a check  while he claims that the government has given the people of color a check with insufficient funds, or a promissory note that no one has paid.

“It is obvious today that America has defaulted on this promissory note insofar as her citizens of color are concerned. Instead of honoring this sacred obligation, America has given the Negro people a bad check which has come back marked “insufficient funds.””

We are all familiar with the experience of eating and drinking.  Dr. King uses metaphors of drinking in several instances to correlate drinking a liquid to drinking attitudes or opinions.  Dr. King suggests:

“Let us not seek to satisfy our thirst for freedom by drinking from the cup of bitterness and hatred.”

Later he uses a complex metaphor comparing a liquid to political actions, speaking of George Wallace, the governor of Alabama at the time who was a strong proponent of segregation.

“I have a dream that one day the state of Alabama, whose governor’s lips are presently dripping with the words of interposition and nullification, will be transformed into a situation where little black boys and black girls will be able to join hands with little white boys and white girls and walk together as sisters and brothers.”

The idea of entering a building is used metaphorically to indicate progress being made toward a certain goal.  We often speak of having doors of opportunities or crossing a threshold to reach a new goal.  Dr. King uses both of these metaphors to describe the work necessary to make progress on civil rights in the United States.  Dr. King also makes a comparison of the differences in civil rights to the differences of a normal house compared to a palace.

“Now is the time to open the doors of opportunity to all of God’s children.”

“But there is something that I must say to my people who stand on the warm threshold which leads into the palace of justice.”

“One hundred years later, the Negro lives on a lonely island of poverty in the midst of a vast ocean of material prosperity.”

“Now is the time to rise from the dark and desolate valley of segregation to the sunlit path of racial justice.” 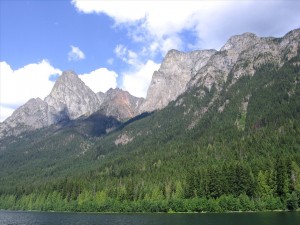 “Again and again we must rise to the majestic heights of meeting physical force with soul force.”

“Let us not wallow in the valley of despair.”

In another visually powerful metaphor, he compares injustice to being a desert while justice is an oasis of water.

“I have a dream that one day even the state of Mississippi, a desert state, sweltering with the heat of injustice and oppression, will be transformed into an oasis of freedom and justice.” 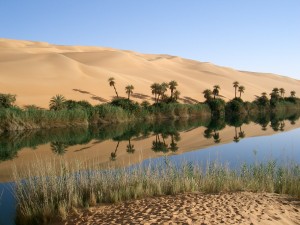 He also describes justice as being solid rock while injustice is quicksand.

“Now is the time to lift our nation from the quicksands of racial injustice to the solid rock of brotherhood.”

In a very powerful metaphor, he describes justice as water in a mighty river.

“We can never be satisfied as long as a Negro in Mississippi cannot vote and a Negro in New York believes he has nothing for which to vote. No, no, we are not satisfied, and we will not be satisfied until justice rolls down like waters and righteousness like a mighty stream.” 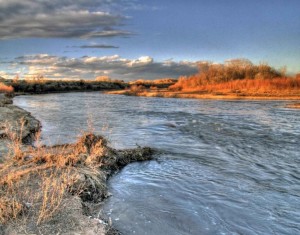 He offers his support for the thousands of marchers who experienced discrimination first hand in their own lives by comparing this discrimination to strong windstorms.

“Some of you have come from areas where your quest for freedom left you battered by the storms of persecution and staggered by the winds of police brutality.”

Dr. King also uses contrasts from nature based on light and dark and different seasons of the year.

“Five score years ago, a great American, in whose symbolic shadow we stand signed the Emancipation Proclamation. This momentous decree came as a great beacon light of hope to millions of Negro slaves who had been seared in the flames of withering injustice. It came as a joyous daybreak to end the long night of captivity.”

“This sweltering summer of the Negro’s legitimate discontent will not pass until there is an invigorating autumn of freedom and equality.”

The final set of metaphors that Dr. King uses in the speech is related to music and sounds.  After spending most of the speech using visual metaphors, he adds a few based on auditory metaphors of sounds and music.

More importantly, he finishes the speech with a powerful metaphor of a bell ringing, borrowing a phrase, “let freedom ring” from the national song, “My Country ‘Tis of Thee.”  We normally associate the ringing of bells with churches, but they have also been used historically in towns to signal emergencies or celebrations. In the song, and in Dr. King’s speech, the ringing of the bells is meant to signify the echoing of the sounds all across the country. In a rhetorical style common to Baptist preaching, he repeats the phrase many times for effect, in fact, a total of twelve times. 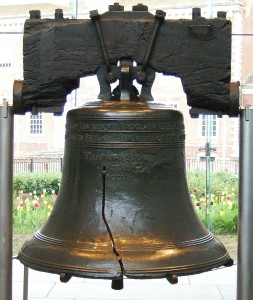 “And when this happens, when we allow freedom to ring, when we let it ring from every village and every hamlet, from every state and every city, we will be able to speed up that day when all of God’s children, black men and white men, Jews and Gentiles, Protestants and Catholics, will be able to join hands and sing in the words of the old Negro spiritual, “Free at last! Free at last! Thank God Almighty, we are free at last!””

You can read the entire text of the speech at http://abcnews.go.com/Politics/martin-luther-kings-speech-dream-full-text/story?id=14358231 or view the speech at http://www.youtube.com/watch?v=HRIF4_WzU1w.  It is moving to watch the speech after all these years.  Watch how the audience reacts to some of his phrases.  Note too that he reads from his notes for the first part of the speech but then does the last five minutes from memory as he gets more and more inspired.  Pretty amazing!

Comments and questions are welcome!

I have a second analysis of this famous speech in another post – Martin Luther King’s “Dream” Speech, Part 2.  Please read this post as well to complete your research.

Next time:  More on metaphors of sounds