There are a great number of metaphors in English derived from scientific terms.  Some are neutral terms such litmus test or DNA (the topic of a future blog post), while others describe problems created by pollution or nuclear technology.  Here are a few of examples of negative scientific metaphors.

Another word for poisonous is toxic, a word originally used to describe poisons used on arrows to kill people with greater efficiency.  Today, toxic is a word usually used to describe a poisonous combination of chemicals created in water or air pollution.  Metaphorically, anything that is extremely bad or potentially harmful may be called toxic.

Example: When banks and Wall Street firms have investments and property that are worth less today than when they were purchased, these may be called toxic assets.

When a nuclear reactor breaks, the core of the reactor may begin to melt because of the release of nuclear radiation.  This event is called a nuclear meltdown.  This term can be used metaphorically to refer to any failure or collapse of a project or program, or the emotional collapse of a person after a traumatic event.

Example: The financial collapse of 2008 was caused in part from a meltdown of investment regulations among Wall Street banks.

When a nuclear explosion occurs, radioactive particles are released into the air.  When these particles return to the ground, this process is known as the fallout.  This term is also related to container metaphors, as when solid material falls out of its container, such as cereal from a broken cereal box.  Metaphorically, the fallout (written as one word) is something that happens as a result of a larger incident.

Example: The fallout from the Watergate scandal included many White House staff members being arrested and President Nixon resigning. 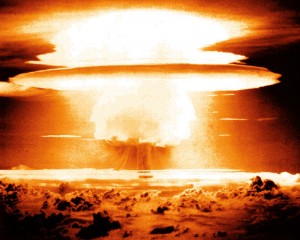 A nuclear explosion is a very dangerous event.  It must be controlled very carefully.  During the Cold War, when the Soviet Union and the United States were at the point of war with each other for several decades, the last option to use to avoid war was to use a nuclear bomb on the other country, known as the nuclear option.  In politics, the phrase nuclear option is used hyperbolically to describe the ruling to let the Senate have 50% majority rule on bills and confirmation hearings for judges and cabinet members as opposed to a 60% vote.

Example: In late 2013, Senate Majority leader Harry Reid invoked the nuclear option to break the long practice of filibusters that was delaying all confirmation hearings.

Next time:  Metaphors of Fire!

One thought on ““Fallout” and the “Nuclear Option” – When Science Attacks!”