This past week marked the 50th anniversary of Lyndon Baines Johnson’s so-called War on Poverty, first proposed in his State of the Union address on January 8, 1964. The civil rights movements of the 1960s highlighted the appalling degree of poverty that many Americans were living in at the time.  President Johnson named his efforts solve this problem his War on Poverty.  Although some modern critics claim that this program was a failure (see Republican Representative Paul Ryan’s recent comments at http://www.politico.com/story/2014/01/paul-ryan-war-on-poverty-failed-102001.html) others note how much the program has reduced poverty for millions of Americans, especially children and the elderly (see http://www.nytimes.com/2014/01/09/opinion/kristof-progress-in-the-war-on-poverty.html?_r=0).

Two months after his State of the Union address, President Johnson delivered a special message to Congress offering more details of his plan on March 16, 1964.  Out of curiosity I read through this speech to see what political metaphors he used in addition to the obvious war metaphors.  I was not surprised to find that he used a great deal of political metaphors in the speech, but I was intrigued that he used a complex array of four different conceptual metaphors to explain his program.  Using the format of Lakoff and Johnson, I can summarize these metaphors as follows: 1) POVERTY IS A PART OF NATURE; 2) POVERTY IS A PRISON; 3) LEAVING POVERTY IS A JOURNEY; and 4) POVERTY IS A ENEMY OF WAR.  I will categorize several metaphors below using excerpts from President Johnson’s speech as examples.  Italics are mine.  You can read the entire speech at http://www.fordham.edu/halsall/mod/1964johnson-warpoverty.html.

1) POVERTY IS A PART OF NATURE

We often compare people or processes to parts of nature.  The word source is commonly used to indicate the origin of some process or phenomenon.  Its origins, however, lie in a French word meaning to be the source of natural spring water.  Thus, talking about the source of poverty is using a metaphor of nature.

Example:  … through a new Community Action program we intend to strike at poverty at its source – in the streets of our cities and on the farms of our countryside among the very young and the impoverished old. 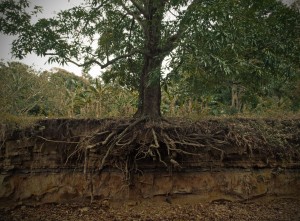 When we compare something to a tree, we are speaking of its strength, age or durability, e.g., saying someone is “as strong as an oak.”   A tree has roots that go deep underground to give it stability and strength in strong winds or high waters.  Saying that a problem is deeply rooted indicates that it has been around for many years and will be very difficult to solve.

Example:  We are fully aware that this program will not eliminate all the poverty in America in a few months or a few years. Poverty is deeply rooted and its causes are many.

2) POVERTY IS A PRISON

Johnson compares being in poverty to being in a jail or prison.  People who are very poor often do not have the means to get a better job (or any job) due to a lack of resources, medical disabilities or financial difficulties.

If one is being forced to live in confined quarters, sometimes the only means of getting out of that situation is by escaping.

Another way of describing an escape is to say that a person is breaking out of prison.

Example:  … we intend to create new opportunities for certain hard-hit groups to break out of the pattern of poverty. 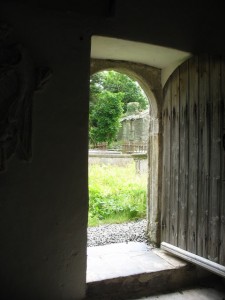 In some situations, merely getting help opening a door can provide the escape that is needed.  Sometimes a tool such as a lever is needed to pry open the door.

Example:  It will provide a lever with which we can begin to open the door to our prosperity for those who have been kept outside.

carry out their plans

Although some people may not consider this to be a metaphor, the phrase carry out takes a physical process and turns it into a metaphorical action.  For example, a person can literally carry out a box from an office, or carry out plans to achieve a goal.

Example:  It will give every American community the opportunity to develop a comprehensive plan to fight its own poverty-and help them to carry out their plans.

3) LEAVING POVERTY IS A JOURNEY

Once a person begins a journey, sometimes a local expert may need to show that person the best road or direction to travel.

Example:  But this program will show the way to new opportunities for millions of our fellow citizens.

Distances on long roads or highways are sometimes indicated by stone markers along the side of the road. The markers that indicate the distance of one mile are called milestones.  In metaphorical terms, a milestone is the observance of a significant amount of progress made in a long process.

Example:  It can be a milestone in our one-hundred eighty-year search for a better life for our people. 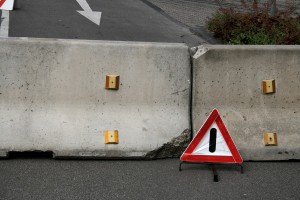 In some cases, roads are blocked by barriers because of construction or dangerous road conditions.  Metaphorically, any impediment to making progress towards a certain goal may be described as a barrier.

When the captain of a ship begins a long journey, he or she must chart the course towards their destination. Metaphorically, starting a new program or process may also be described as charting a new course.  Additionally, the idea of having a new course indicates that the approach being taken is different from previous approaches.

Example:  The Act does not merely expand old programs or improve what is already being done.  It charts a new course.

4) POVERTY IS AN ENEMY OF WAR

Finally, and most importantly, Johnson compares the entire approach to eliminate poverty in the United States to a war against a strong enemy.  I have written about war metaphors in previous posts, although I am not sure of the exact origin of these types of metaphors.  In 1964, President Johnson would have been speaking only a generation after World War II, and in the middle of the Vietnam War.  Perhaps war metaphors would not be unexpected in that time of history.  His approach to solving the problem of poverty is to relate it to a war.  He repeats the phrase war on poverty six times during the speech.

Example:  Therefore this bill creates, in the Executive Office of the President, a new Office of Economic Opportunity. Its Director will be my personal Chief of Staff for the War against poverty. I intend to appoint Sargent Shriver to this post. . . . 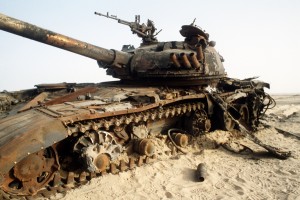 Opponents in a war are commonly called enemies.  Any social problem in a metaphorical war may be referred to as an enemy.

When a government goes to war, it needs soldiers to fight it.  Its leaders can then recruit people or enlist volunteers to become soldiers or other military personnel.

Example:  … I ask for the authority to recruit and train skilled volunteers for the war against poverty.

Example:  It will give dedicated Americans the opportunity to enlist as volunteers in the war against poverty.

Example:  A new national job Corps will build toward an enlistment of 100,000 young men. They will be drawn from those whose background, health and education make them least fit for useful work. . .

Countries that go to war are often developing new guns, tanks, bombs and other weapons to give them an advantage in a war.  However, new technology must be tested in the filed to make sure that it works properly.  This process may be called testing the weapons.  Metaphorically, trying out new approaches to solving old problems may be called testing weapons as well.

Example:  It strikes at the causes, not just the consequences of poverty. 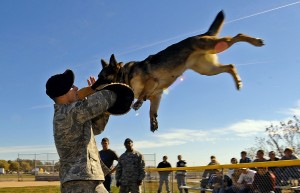 A strong military maneuver in a war is known as an attack.  In politics, the term attack is commonly used metaphorically to indicate any strong verbal message or executive decision.

Example:  It will give the entire nation the opportunity for a concerted attack on poverty through the establishment, under my direction, of the Office of Economic Opportunity, a national headquarters for the war against poverty.

A dominant military force may completely conquer another nation, as the Spanish conquistadors did to many Central and South American cultures in the 16th century.  In Johnson’s speech he refers to winning the war against poverty as being a process of conquering it.

Example:  Because it is right, because it is wise, and because, for the first time in our history, it is possible to conquer poverty, I submit, for the consideration of the Congress and the country, the Economic Opportunity Act of 1964.

driven from the land

Example:  It cannot be driven from the land by a single attack on a single front. Were this so we would have conquered poverty long ago.

Winning a war requires winning many battles.  The idea of a military battle is often used metaphorically to indicate any struggle to solve a difficult problem.

Ultimately, defeating enemies in a war must result in a victory.   Metaphorically, any social problem that can be solved by government action may be described as a victory.

Example:  It is a total commitment by this President, and this Congress, and this nation, to pursue victory over the most ancient of mankind’s enemies.

In sum, I believe that President Johnson’s powerful use of the metaphors of nature, prison, journeys and war helped persuade Congress to enact his War on Poverty.  Sadly, many American today still live in poverty.  Perhaps more powerful speeches are needed to get our current Congress to act?