Several weeks ago, as I planned a series of blog posts concerning metaphors of nature, including those based on natural disasters, I had no idea that several horrific natural disasters would occur in the past two weeks.  Chile recently had an 8.2 magnitude earthquake and tsunami.  Fortunately, only six individuals were killed.  Closer to home, an enormous mudslide in my home state of Washington tragically killed 30 people two weeks ago.  Thirteen people are still missing as I write this.  My thoughts and prayers are with the victims of those tragedies.

Sadly, natural disasters are the basis of several common metaphors without regard for any loss of life or property in these tragedies.  Nonetheless, these disasters are part of our natural experiences and are used to create metaphors describing unexpected or tragic events in other cultural domains.   Here are a few examples. 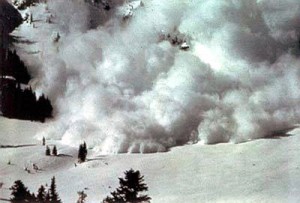 Example:   If politicians start talking about reducing people’s social security benefits, they will most likely receive an avalanche of angry responses from senior citizens.

Earthquakes are caused by shifts in the earth’s crust or continental plates.  Tremors are smaller quakes that happen before or after a major earthquake.  Metaphorically, earthquakes and tremors can describe important events that happen in an organization that change the normal course of activities.

Example:   When Democrats lost many seats in the House of Representatives in 2010, it sent tremors through the Democratic Party and they knew that they had to regroup in order to win elections in 2012.

Example:   Cheers erupted all around the world when it was announced that the famous terrorist Osama bin Laden had been killed in Afghanistan.

Vesuvius is a famous volcano in Italy.  Temper is one’s ability to become angry quickly.  A Vesuvian temper, therefore, is a metaphorical phrase indicating a temper that erupts quickly and strongly.

Example:   Although John McCain is normally a calm, rational person, some colleagues claim that he has a Vesuvian temper when he is upset.

Example:   In 1984, Ronald Reagan was reelected for a second term of president, beating Walter Mondale in a landslide victory.

When a river overflows its banks, the surrounding countryside, towns, and cities can be flooded with water.  As a metaphor, the concept of flooding is used to describe a large amount of something that covers a wide area.

Example:   In times of high unemployment, a business advertising for workers will be flooded with applications.

In some areas, rivers are dammed up and the water is held back with gates.  When the water reaches a high level, the floodgates may be opened to release the pressure.  Metaphorically, opening the floodgates means that a large amount of information or many actions are suddenly released.

Example:   When a war breaks out, floodgates open and many refugees flee the fighting. 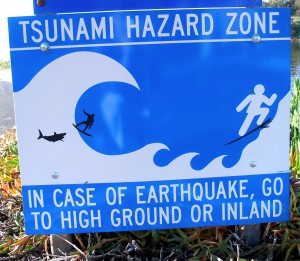 A tsunami is a huge ocean wave that devastates coastal communities as happened in Indonesia in 2004 and in Japan in 2011.  Metaphorically, the word tsunami is used similarly to the term flood indicating a large amount of something happening quickly.

Example:   Critics of Barack Obama feared that his consumer watchdog efforts would result in a tsunami of new regulations on businesses.

Next time:  When Nature is Toxic