To continue my short series of book reviews, I would like to share a few comments on an amazing book entitled Politicians and Rhetoric:  The Persuasive Power of Metaphor, 2nd Edition by Jonathan Charteris-Black (Palgrave MacMillan, 2011).    Charteris-Black is a professor of linguistics at the University of the West of England in Bristol, England. 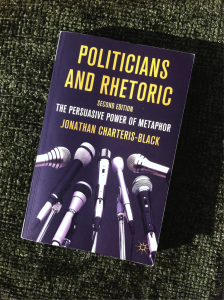 The book consists of twelve chapters.  The first two chapters provide an excellent summary of the importance of understanding metaphors in the art of rhetoric, persuasion, and speech making used by all successful politicians.  The next nine chapters consist of incredibly insightful analyses of how certain political leaders have used metaphors in their speeches.  These politicians include four giants of British politics: Winston Churchill, Enoch Powell, Margaret Thatcher and Tony Blair along with five American leaders: Martin Luther King, Jr., Ronald Reagan, Bill Clinton, George W. Bush and Barack Obama.  The final chapter provides an analysis of the nexus of myth, metaphor and political leadership.

In each chapter, Charteris-Black analyzes the speeches of the politician with a specific theme that characterizes their particular rhetoric.  For example, he discusses Winston Churchill in terms of the heroic myth, Martin Luther King, Jr. and the messianic myth, Ronald Reagan and the romantic myth, Margaret Thatcher and the myth of Boudicca, George Bush and the rhetoric of moral accounting and Barack Obama and the myth of the American Dream.  Each person’s speeches are analyzed in the historical context and particular political environment.  He explains how we can understand the rhetoric of Winston Churchill and Margaret Thatcher in terms of myths of heroes or past warriors.  Churchill had to rally British citizens to make sacrifices for the war effort and had to persuade the Americans to become their allies.  He was successful at doing this by using metaphors of journeys and heroes. Thatcher tapped into the myth of Boudicca, the 1st century Celtic queen who led an uprising against the Roman army.  Thatcher used metaphors of conflict as in the concept that political opponents are enemies to get the British to rally around her as Boudicca did centuries earlier. Charteris-Black also provides insightful analyses of the speeches of Bill Clinton, George W. Bush and Barack Obama, all in the context of difficult political climates.

By far the most fascinating chapter for me was the section on Martin Luther King, Jr. Having analyzed his speeches myself, I was in awe of the depth of analysis that Charteris-Black presented in this book.  He analyzed his speeches in terms of the Messianic myth, journey metaphors, landscape metaphors and in the context of the segregation and non-violence of the 1960s.  This chapter alone is worth the price of the book. (BTW, my most popular blog posts are concerned with Martin Luther King, Jr. speeches.  All of the students reading this blog with assignments on MLK speeches would be well advised to buy this book!)

My only criticisms of the book consist of a few editorial oversights.  Although the author provides excellent appendices on his corpuses, a list of conceptual metaphors analyzed in the book, and a general index, cited authors are not included in any of the indices, a strange fact given the excellence of the scholarship throughout the book.  Also, there is an inconsistent use of italics in examples of metaphors.  In most cases, the conceptual metaphors being analyzed are italicized in quotations from the corpus while in other cases there are no italics. More substantively, in the chapter on Margaret Thatcher, Charteris-Black compares her to Boudica but never gives a background on the Celtic warrior, nor does he make explicit how Thatcher compared to Boudica.  Perhaps British readers are more familiar with both Thatcher and Boudica but Americans may have to do a bit of research to understand the relationship between the two as I had to do.

Finally, I also found it odd that Charteris-Black uses a theory of metaphor analysis called blending theory without citing any references for its origin.  I assume he is referring to the theories proposed by Fauconnier and Turner (2002) or the nice summary of the theory in Koveces (2004) but he does not mention either.  Despite this omission, he makes great use of blending theory and, while although a bit cumbersome to explain, promises to be a very useful way to explain metaphors.  No one quite understands how citizens understand political metaphors, using blended theory may be a way to fine tune our analyses of metaphor usage.

Overall, Politicians and Rhetoric is a great addition to our study of metaphors in politics.  Charteris-Black shows a masterful understanding of classical and modern rhetoric, metaphor analysis and current political machinations of skilled orators. It is essential reading for any student of English, linguistics, or political science.

Next time:  Obama and the ISIS Crisis