This past week, Donald Trump claimed that Hillary Clinton was “playing the woman’s card” and would not even get 5% of the vote if she were a man. Critics quickly pounced on this sexist comment. Hillary Clinton may have the last laugh, however, since her campaign claims to have raised $2.4 million dollars as a backlash to the comment. For me, the idea of “playing the woman’s card” reminds me of the popular use of the metaphors of games in American politics. I have mentioned some of these metaphors previously, but they are worth mentioning again.

Also, this past weekend on the television news show Meet the Press (May 1, 2016) the historian Doris Kearns Goodwin described the problems in the Middle East as follows: “This is like three-dimensional chess. And most of us are playing checkers at understanding foreign policy right now.” These types of metaphors are derived from our experiences with board games. Let’s have another look at some metaphors derived from games.

A normal deck of playing cards has 52 cards in four suits: clubs, spades, hearts and diamonds. In some games, a player must put down a card on his or her turn that matches the suit of the previous card. This is called following suit. Metaphorically, one can follow suit by doing the same thing that a previous person has done. In politics, a president may follow suit with a certain program or policy that was already in place when he or she became president.

Example: When Barack Obama became president in 2008, he followed suit with George Bush’s policy in Afghanistan, increasing the number of troops there and stepping up efforts to find Osama bin Laden. 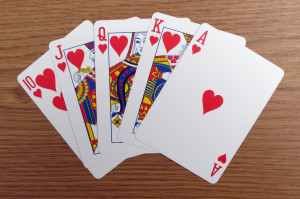 As with the idea of following suit, we would say that a person with many good cards in any suit would have a strong suit, e.g., an ace, king and queen in spades would mean a strong suit of spades. In metaphorical terms, a person’s strong suit is his or her special talent that is superior to the competitor’s abilities.

Example: When George W. Bush was president, he had a talent of appearing to be a regular guy, with rolled up shirtsleeves and speaking plainly. It was such a strong suit for him, he used it many times when giving speeches or press conferences to earn confidence from American citizens.

In some card games, a certain card may have more value than all the others. This is often called the trump card. In politics, one can trump an opponent or play the trump card to beat an opponent in an election, debate or discussion.

Example: In the 2008, John McCain thought he had the trump card to win the presidential election when he asked Sarah Palin to be his running mate, but they were not able to win a trip to the White House. 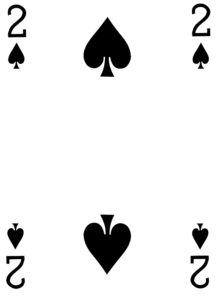 Some card games also have a card that is designated as a wild card, i.e., one that can take on the value of a higher ranked card if it is to the advantage of the player who holds it. For example, in the game of deuces wild, a 2 card can have the value of an ace, king or queen if it helps the player win the hand. The difficult part of this type of game is that no one knows when the wild card will appear or how the player will use it, so it could be a surprise to everyone when it happens. In politics, a wild card is a person, program or policy that has unexpected power in a certain situation.

Example: In the 2010 midterm elections, the tea party candidates were often considered wild cards since they were not experienced politicians and no one was sure if they could win elections or not.

In card games, one usually plays a card that will help him or her win the hand or the game. Thus to play a card means to do something to your advantage. In politics, the idea of playing a race card arose when people talked about African-American candidates winning elections because of their race, not their qualifications.

Example: In the 2008 election, some supporters of Barack Obama were accused of playing the race card when they urged people to help him become the first African-American president.

In a similar sense, someone may be accused of playing the so-called age card if they urge people to vote for a candidate because of his or her age and experience and not the qualifications.

Example: Some supporters of John McCain who pointed out the young age and political inexperience of Barack Obama were thought to be playing the age card.

Also, female candidates may be accused of playing the woman’s card. 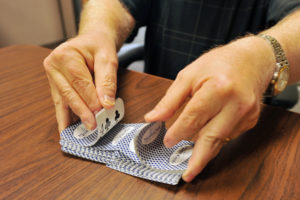 When people play cards, the deck must be shuffled before each new deal. This ensures that the same cards are not dealt out in the same way more than once. When we speak of politics of being a card game, we may say that we need to reshuffle the cards when there has been an unexpected turn of events. Reshuffling the cards means one of two things: 1) there has been a change in the policies or personnel of a certain government agency, or 2) someone must reorganize a current situation to bring a new balance and order to the problem.

Example: When a U.S. president is elected to two consecutive terms, he or she might reshuffle the cards of the cabinet or other key positions at the beginning of the second term.

In some card games, it is sometimes better not to reveal if you have a very good hand of cards. One must be prudent and not try to win the game all at one time. One must be patient and use strategy to win the game in several steps. In politics, we might say that people overplay their hand if they try to push an issue too hard all at once instead of waiting for the diplomatic process to work.

Example: In 2009, some Middle East experts said that Iran might be overplaying its hand by claiming it was going to build a nuclear bomb. Many other countries began to take a stronger stance against Iran instead of trying to work with them on diplomatic issues.

Example: President Obama’s gambit of working with Pakistan to end the war in Afghanistan may take years to see any results. 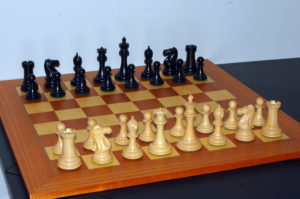 When two chess players are tied and neither player can win, this is called a stalemate. In politics, when two political parties, two candidates or any two persons cannot find a solution to a problem, this may also be called a stalemate.

Example: For the past several decades, many U.S. presidents have tried to end the stalemate between Israel and Palestine with limited success.

When a game of chess is completed, this is simply called the end of the game or the endgame. In common terms, an endgame has come to mean the objective or primary goal of a policy or approach to solving a problem.

Example: When the war in Afghanistan dragged on for more than ten years, many Americans wondered what the endgame really was for our troops there.

Board Games and Puzzles 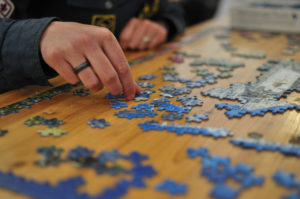 There are many types of board games and puzzles that people enjoy all over the world. Crossword and jigsaw puzzles are popular games that require a great deal of patience and intelligence to complete. The word puzzle formerly referred only to the game itself. Now it can also signify the action of being confused. In politics, many difficult situations can be puzzling to politicians and citizens alike.

Example: After the 9/11 terrorist acts in New York city, many Americans puzzled over why they were the target of such a vicious attack.

Board games are often played on tables. In some cases, the board can only be read in one direction. Thus a player may have to turn the board around to read all parts of the game when it is his or her turn. This is sometimes referred to as turning the tables. In common terms, when someone has changed a situation to his or her advantage, this is also called turning the tables.

Example: In the 2010 health reform bill, President Obama tried to turn the tables on the health insurance industry and give back some power and choice to consumers.

It is interesting that our everyday experiences with games translates into many creative metaphors.  However, it is not merely the aspect of a fun game that we are thinking about when we create metaphors.  Rather it is more in the competitive nature of games that is easily compared to politics and elections.  Stay tuned for more interesting metaphors in the news! 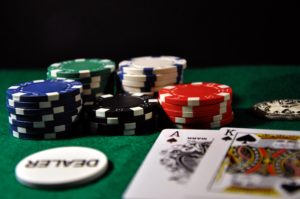